The Interview with MD of ChartWorld GmbH and SevenCs GmbH, Mr Jochen Rudolph

During SMM in Hamburg we had an interview with Mr. Jochen Rudolph, Managing Director of the companies ChartWorld GmbH and SevenCs GmbH. Before starting the interview we had a little chat about our magazine and presented our SMM Hamburg special issue. Mr. Rudolph said "I have been to Turkey already in order to visit shipping companies and shipyards. I was quite surprised and it is again confirmed in your magazine that there seem to be far more women in top positions in the Turkish shipping industry compared to, for example, Germany. Is my impression true?" We were very surprised to hear that, and were happy and proud because of the successful women in the Turkish shipping industry.

SeaNews: Could you please give us some background information about SevenCs and ChartWorld?
Jochen Rudolph: SevenCs was established back in 1992. Two professors of the maritime university in Hamburg had the idea to introduce electronic chart navigation to the world, thus laying the foundations of ECDIS. On the one hand they originally developed software to produce and validate electronic chart data and, on the other hand, the Kernel which is software to display such electronic charts on board a ship.)
SeaNews: Are you referring to the S-57 Kernel?
Jochen Rudolph:  Well, S-57 is actually a data format - the original IMO approved official format for electronic navigational chart data. The development of the format, standards and associated tools to produce the data has been significantly influenced by SevenCs. S-57, by the way, is soon going to be replaced by a new data format called S-100. But coming back to your previous question, besides developing maritime software, the founders got involved in numerous EU and Government funded research projects, helping the company and its specialists to gain international reputation. But, while a lot of energy had been put into the groundwork for ECDIS implementation, it turned out that the distribution of electronic charts was not very well taken care of. As a consequence in 2002 a daughter company, ChartWorld GmbH, was established. This enterprise was the first of its kind in the world to concentrate all its efforts on the distribution of official digital charts.
In order to finance its growth SevenCs invited investors at some stage and then eventually got sold entirely to the UK Hydrographic Office, UKHO. 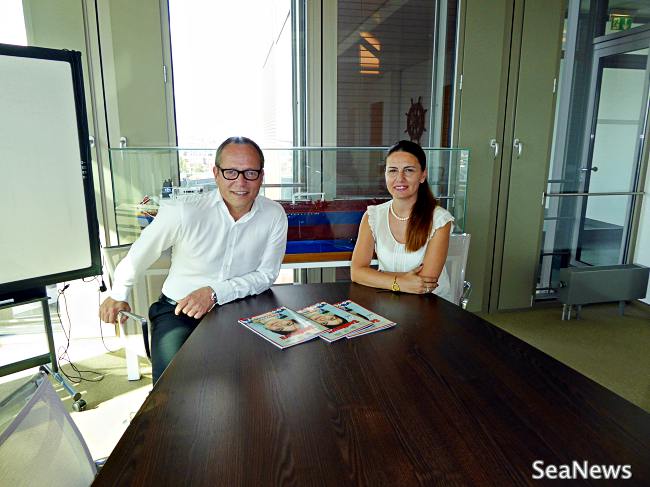 Mr. Jochen Rudolph with Mrs. Fulya Tekin Istikbal of SeaNews at SevenCs Headquarters, Hamburg during interview
SeaNews: So ChartWorld has nothing to do with ECDIS?
Jochen Rudolph: On the contrary, ChartWorld deals with electronic charts which are used within an ECDIS and also offers ECDIS-as-a-service. SevenCs on the other hand concentrates on development and offers software components used as elements within an ECDIS. Plus, it is probably worthwhile to mention that ChartWorld has a well-organized chart production of its own. The charts made here are special charts of high accuracy, custom-made for e.g. pilots, harbour authorities, shipyards and the like.
SeaNews: What is the relation between the two companies? Are they independent?
Jochen Rudolph: Yes, they are independent, they have different products, different focus markets and of course different target customers. We consider them to be two independent companies with the same owner, though. This was the case right from the beginning when ChartWorld was established and was even maintained as such while UKHO was the owner. After they had kept the companies for almost five years UKHO eventually decided to resell them, since they apparently did not fit into their business concept as originally expected. At about the same time Oliver Schwarz and I were looking for a company or enterprise to get a concept going which we had developed over the years - an ECDIS business concept. After we had looked closely at some different companies we came across SevenCs and ChartWorld. We met John Humphrey who was the Managing Director of SevenCs and ChartWorld at that time, and also contacted the UKHO showing our interest. It took nearly a year of talks, tender procedures and negotiations until we finally purchased the companies at the end of 2011. For us it was a perfect fit to start our business concept “ECDIS-as-a-Service” which encompasses both software development and chart distribution.
SeaNews: It is quite interesting to hear that you were looking for a company to buy instead of just setting up a new one. Was there a special reason for that?
Jochen Rudolph: Actually, yes, there was. The IMO decision to impose mandatory carriage of ECDIS on board Solas vessels was very important to us. When developing our business concept we already knew the ECDIS carriage requirement was due to come and the time window for the shipping industry to comply with would be rather short. Setting up a new company would have taken too much time. Plus, it was very important that we got immediate access to official charts, especially charts from UKHO. Although Oliver Schwarz and I had some knowhow about ECDIS as well as ECDIS development and distribution, it was easier to just buy a company in order to get a foot on the road much quicker. That was the main reason.
SeaNews: Now we would like to ask you about yourself, what is your background? Are you the first person to receive a type approval for ECDIS?
Jochen Rudolph: Actually, my background is business administration. I studied Business Administration in Hamburg, and then I worked for a trading company in South Korea. After having worked for 4 years in Asia I had the choice to either stay in Korea or come back to Germany working together with Oliver Schwarz. I had met Oliver at university and we became friends. When his father had died he asked me if I were interested to come back and join him, which I gladly agreed to. At about that time we also got into contact with Transas and then started distributing Transas products. We managed to be rather successful and got the permission to establish a company with the name Transas GmbH, remaining in our ownership. We started off with just 4 people. In the end we had some 70 employees working for us, taking care of distribution of Transas products and complementary products all over Central Europe. In the beginning our main focus was selling simple electronic chart systems called ECS. Back in 1994 or 1995 nobody was thinking of electronic charts, especially since shipping companies usually do not buy anything unless they are forced to. It was difficult to go and see a shipping company and say “look this is a good idea to buy" We had to create demand first. Eventually some captains and shipowners reported about the great experience they had with our system in fog, bad weather and difficult manoeuvring situations. That helped us a lot to conquer the German market. However, I believe the key to success was actually my friend Oliver who has not only fantastic contacts in the industry, but is the best businessman I have ever met. 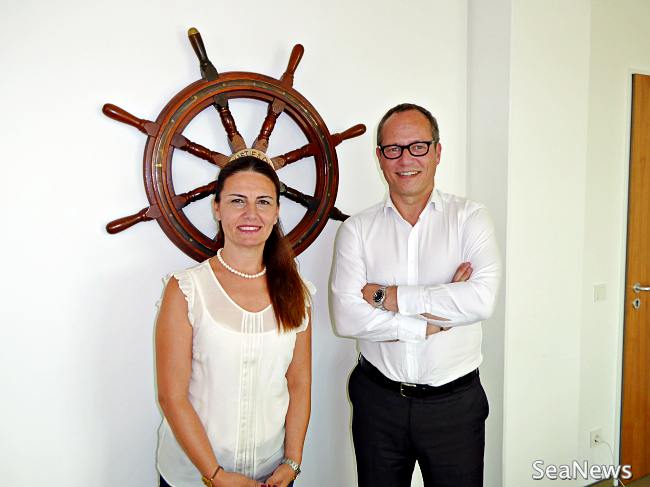 SeaNews: Did these multi-layer electronic charts already exist at that time?
Jochen Rudolph: Yes, indeed. Transas was actually one of the forerunners to produce and develop electronic vector charts in a proprietary format. The chart coverage was quite good and helped us to successfully sell electronic chart systems to German shipowners. German government authorities became aware of the increasing number of chart system installations and how crews made use of it. So they eventually claimed that "If you want to install such a navigational aid on a ship, you must have a type approval in one way or the other" That was the bottom line. A German only standard for ECS as a navigational aid was introduced rather quickly. A type approval procedure for ECDIS, though, did not exist. Setting up corresponding test procedures was a big task. ECDIS replaces paper charts - a major change to navigation and shipping in general. Matthias Jonas, today head of the German Hydrographic Office, was in charge of type approval at that time and he managed to publish the very first ECDIS test procedures. I admire his enthusiasm and ambition to get great things done. It was in October 1999 when we got the first type approval for ECDIS worldwide. Obviously a special achievement, as it attracted a lot of print and even TV coverage at that time. Coming back to your question: No, I was not the first person receiving the first ECDIS type approval, but I am proud that I was part of the team of developers, engineers and product managers who made that happen. Besides getting type approval we also set up the supply chain management, component production and ECDIS assembly in our Hamburg facilities, supplying ECDIS systems not only to our own markets but for the entire Transas group. Setting up a production of such scale was not easy, as the demand for quality equipment is so much higher compared with computers and monitors used in an office environment.
SeaNews: Maybe it was the tower computers?
Jochen Rudolph: At the beginning we had used ruggedized industrial computers manufactured in Taiwan. Some sort of half size tower computers. Later the hardware was custom-made to our design in a Swedish company specialized in maritime equipment.
SeaNews: Back to the company issue again, what is your main area of activity? How many people are employed in your company? What is your personal area of activity?
Jochen Rudolph: ChartWorld is a group of companies with offices in Hamburg, Cyprus and Singapore. The company ChartWorld itself is focusing on selling electronic charts and publications as well as providing “ECDIS-as-a-service”. In fact we are not selling ECDIS but rather provide equipment, charts, service, maintenance, crew training and consultancy to shipping companies at a small monthly fee. The daughter company SevenCs is still and will remain a mere software development company. SevenCs develops software tools for electronic chart production mainly used in hydrographic offices. It also produces a so called Kernel which is a software development kit allowing for the display of electronic charts. Many well-known ECDIS manufacturers are using the SevenCs Kernel. The company also develops dedicated navigation software for OEM partners as well as custom-made pilot navigation systems called PPUs, portable pilot units. Altogether, we are employing some 75 people in the group.
SeaNews: Could you please tell us about your products in general and the PPUs in particular?
Jochen Rudolph: The PPU software has been developed in co-operation with the German pilots. It is actually an ongoing project in which we try to continuously cater for the changing demands of pilots. This is rather typical for SevenCs. Our strength is the customization of software; on one hand precisely considering the requirements of our customers while on the other hand bringing in our extraordinary know-how. This is not only true for the navigation software but just as much for the suite of software tools for ENC production and for the Kernel software development kit. 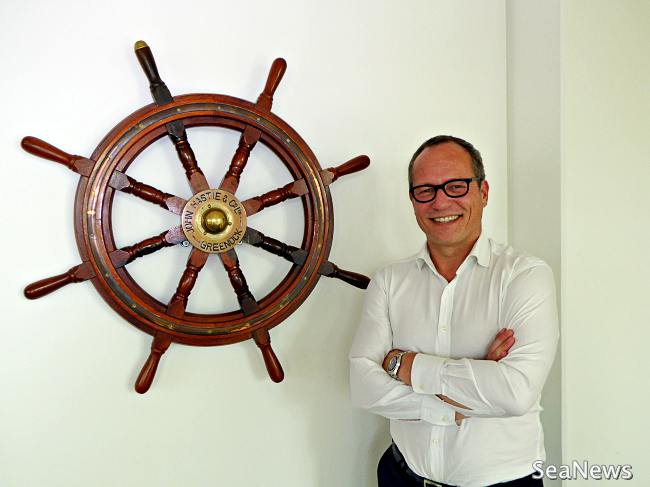 Capt. Bülent Dandin: “Investing in marine technology is more appropriate than in ships or shipyards”

'Data Hidrolik will be at SMM Hamburg'