The bodies of two of four workers missing after a dredging vessel caught fire and sank in Corpus Christi, Texas, were recovered on Saturday, the U.S. Coast Guard said. 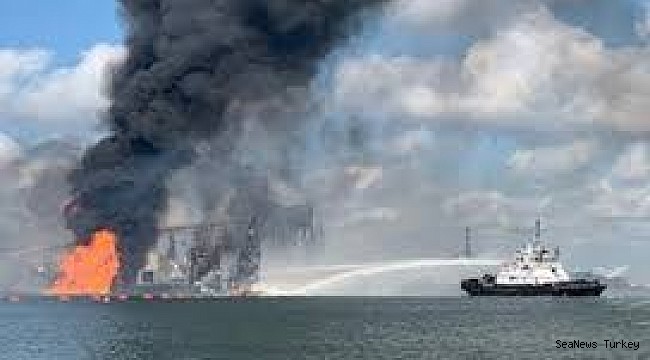 Four personnel working on the dredger Waymon L Boyd went missing and six were sent to the hospital on Friday after the vessel caught fire in the Corpus Christi Ship Channel. The search for the other two missing workers was suspended on Saturday night, Coast Guard officials said.

Local authorities had said initially that the fire was triggered by an explosion after the Orion Marine Group dredge struck a gas pipeline in the ship channel at around 8 a.m. on Friday, but an official investigation into the incident is underway.

"It will not be clear for some time the cause of this accident, and any definitive statements to the contrary would be premature," said Sean Strawbridge, CEO, Port of Corpus Christi.

The fire on board the dredging vessel was extinguished Friday night after the vessel broke apart and sunk, the Coast Guard said.

Pollution and salvage response efforts continue after Coast Guard crews and partner agencies commenced dive and salvage operations at approximately 10 a.m. Sunday. The Coast Guard said a piece of the dredge was located in the middle of the channel and is being removed.

The Texas General Land Office, state lead for coastal oil spill response, is on scene and is working to identify and protect Texas natural resources and ensure the spill is contained. Approximately 1,600 gallons of diesel fuel has been removed from the water and 680 gallons of diesel fuel/water was skimmed overnight.

“The Captain of the Port has reopened the Corpus Christi Ship Channel with certain restrictions from Chemical Basin to Viola Basin," Strawbridge said.

"While the search and rescue mission for the lost crewmen of the Waymon L Boyd has concluded, the suffering of the injured crew members and the families of those lost still endures. Our heartfelt prayers are with them all," Strawbridge added.

"We continue to work alongside the U.S. Coast Guard, the Port of Corpus Christi Authority, TCEQ, and the other agencies to assist in the recovery of our personnel and the wider investigation into this incident," said Mark Stauffer, CEO, Orion Marine Group. "Our focus is on supporting our employees and their families during this difficult time and our thoughts and prayers are with them and all the first responders."