Turkish Energy and National Resources Ministry said the gradual rise of the oil pumped by Iraq into the Kirkuk-Yumurtalik pipeline, until it reached full capacity as soon as possible, would be in the best interest of the two countries. 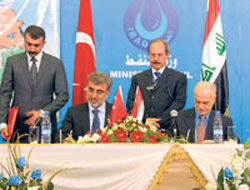 Turkish Energy and National Resources Ministry said the gradual rise of the oil pumped by Iraq into the Kirkuk-Yumurtalik pipeline, until it reached full capacity as soon as possible, would be in the best interest of the two countries.

Turkey and Iraq extended the deal for 15 years.

The ministry posted a statement in its official website clarifying the agreement signed on September 20 between Turkey and Iraq amending the crude oil pipeline agreement of 1973. It said they released the statement in order to clarify the situation following the appearance of news about the issue in the national and international media as well as questions directed to the Ministry.

The Ministry said the new amendment did not bring a new interpretation to the distribution of the hydro-carbon resources of Iraq, set out in the Constitution of the Republic of Iraq.

"This is an entirely internal affair for the Iraqi people to resolve. However, we remain very hopeful that once the new government is established in Baghdad, the Iraqi parties will be able to resolve their internal differences to the best interests of the people of Iraq by approving the long awaited Revenue Sharing and Hydrocarbon Laws," said the Ministry.

It said the amendment agreement obliged the Turkish and Iraqi sides to take full responsibility for the operations, maintenance and the management of the part of the pipeline system Located within their own territory.

"Thus, it is up to the Iraqi side alone to manage which type of Crude Oil mix is put into the pipeline system within Iraq. Once the pumped Crude Oil crosses the Turkish Territory, it will be guaranteed by the Turkish side to be securely transported to Ceyhan.

Under these circumstances, it should be underlined that the main expectation of Turkey is the steady increase of the amount of the crude oil that will flow through the Iraq-Turkey Oil Pipeline. Reaching the maximum capacity of throughput, as swiftly as possible, would serve the interests of both countries," said the agreement," said the Ministry.