The Iuventa ran hundreds of missions to save migrants from drowning off the coast of Libya. But after Europe cracked down on migration, its crew found themselves facing prosecution 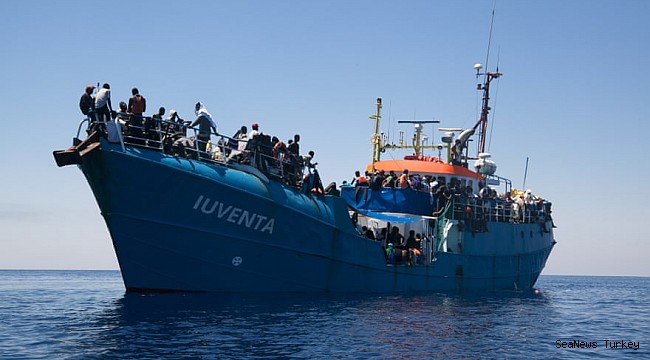 As patrol boats with flashing blue lights surrounded the Iuventa, just outside the port of Lampedusa on the evening of 1 August 2017, its crew were more annoyed than alarmed. For three days, the old fishing trawler, crewed by volunteers from the German NGO Jugend Rettet (Youth Rescue), had answered a string of requests from the Italian coastguard that to them made no sense. “This madness hopefully will soon be over,” read a message sent from the ship’s bridge to Jugend Rettet base camp shortly after 10pm.

In the summer of 2017, two years on from the peak of Europe’s refugee crisis, smugglers in Libya were still sending hundreds of people a day to sea in unsafe rubber boats, and the Iuventa’s crew wanted to be where the action was. In a patch of sea just off the coast of north Africa, about a dozen NGO ships were searching for boats in distress – a direct challenge, as many of them saw it, to European governments that had scaled back state-run rescue efforts.

Yet the Iuventa had been following instructions that drew it further away from the rescue zone and closer to Italian territorial waters. According to the ship’s records, the Italian coastguard first told the crew to rendezvous with an Italian navy ship to collect two men found adrift at sea, and deliver them to another. The second ship never turned up. Then they were told to look for a blue and white fishing boat with 50 people on board, apparently foundering in the sea close to Lampedusa. As night fell on 1 August, after a day spent searching the waves in vain, a message came through: call off your search and proceed into port.

It was the third time in a few months that the ship had been ordered into the harbour at Lampedusa. In just over a year, the Iuventa – crewed by a group of young, motivated people “who could not stand to see the situation in the Mediterranean any longer”, as one put it to me – rescued more than 14,000 people. Most of these rescues were coordinated by the Italian coastguard, but the relationship was increasingly strained. The Iuventa’s revolving crew of volunteers were outspoken critics of Europe’s border policies, and the small, agile ship took more risks than some of the larger NGO vessels, sailing as close as possible to Libyan waters in order to be able to rescue people from unsafe boats sooner. As one Italian media outlet put it, the ship was “like a sort of Berliner squat out in the middle of the sea – very well organised, radical and antagonistic”.

As the Iuventa entered the harbour of Lampedusa, the crew expected to be questioned briefly by police, as they had been on previous occasions, then allowed to get back to work. They were wrong. Within a few hours, their ship would be seized, marking the beginning of a long and still unresolved criminal investigation that leaves 10 humanitarian volunteers facing up to 20 years in prison.

In the small hours of 2 August, while a crowd of journalists assembled on the quayside filmed and took photographs, detectives specialising in organised crime searched the Iuventa. The following morning, before the crew were even fully informed of the case against them, details were splashed across the Italian media. This “German extremist NGO”, as one newspaper later put it, was suspected of aiding illegal immigration – a crime in Italian law – by collaborating with Libyan smugglers. News outlets quoted liberally from a case file that showed the Iuventa had been under surveillance for months: there were even transcripts from a recording device placed on the ship’s bridge. Police photographs, labelled and distributed to news agencies, purported to show several occasions on which the ship’s crew had received migrants directly from boats driven by smugglers themselves.

“We don’t have anything to hide, and we are looking forward to returning to the search and rescue zone one day, to fight for human rights,” declared a member of the crew, who gave her name as Katrin, in a video statement released to the media. But these were explosive allegations, at a time when migration had become such a toxic issue that Italy’s interior minister declared he “feared for the democratic integrity of the country”. Italy’s populist opposition parties led the charge against rescuers, accusing them of being taxi del mare, a “sea taxi” service for migrants, while the government was pressuring NGOs to limit their operations. In the spring of 2017, two other NGOs had been investigated – but this was the first time a ship had been seized. Within months, under the looming threat of prosecution, NGOs were all but forced out of the Mediterranean.

Today, the Iuventa remains impounded, and 10 of its crew members are still waiting to find out if they will face trial. They deny ever working with smugglers, and have assembled documentary evidence that they say proves their innocence. More disturbingly, investigative journalists in Italy and elsewhere have unearthed evidence which appears to show that the surveillance began not with the Italian state, but with a spying plot involving a private security agency and the far-right political leader Matteo Salvini.

The case is not yet over, but it has already marked a turning point: in just a few years, Europe has gone from saving lives at sea to attacking the people who do it. And it all began with the moment, in the words of the Italian author and migration specialist Annalisa Camilli, that “humanitarians were transformed from angels at sea into dangerous collaborators with smugglers”.

More than three years since he last sailed a rescue mission, Dariush Beigui’s mind still clicks into gear when he sees news of a boat in distress in the Mediterranean. The German skipper, a punk rock fan who pilots barges around the port of Hamburg for a living, mentally prepares to wake up his crewmates, to manoeuvre the Iuventa into position and scan the horizon with binoculars, ready to dispatch the ship’s speedboat. But with the Iuventa sitting idle in the Sicilian port of Trapani, none of this is possible. “The hardest thing for me is to sit here watching social media, knowing that if I was there I could help,” he told me. “Maybe not to rescue everybody, but at least one person.”

I met Beigui in Berlin in early 2020, along with two other members of the “Iuventa 10”, Hendrik Simon and Sascha Girke. All three, now in their early 40s, volunteered to work on the Iuventa after Jugend Rettet launched in 2015 via a crowdfunding campaign. Many of the volunteers knew each other from past campaigns in environmentalist, antifascist and squatting movements, and they brought practical skills to the Mediterranean, along with a DIY ethos: Girke works as a paramedic in a town outside Berlin; Simon, an IT technician from Bremen, had driven speedboats for Greenpeace.

In the summer of 2016, when the Iuventa first went to sea, the number of people crossing the central Mediterranean from Libya was at record levels. The people-smuggling trade, once tightly controlled by the former Libyan leader Muammar Gaddafi on Europe’s behalf, had boomed as the country collapsed into civil war. Since the overthrow of Gaddafi in 2011, tens of thousands of people a year – displaced by war, looking for work, or just desperate to get out of Libya – paid for passage on overcrowded inflatable dinghies that were pushed out to sea with only a few hours’ worth of fuel. Unless given assistance, once they got into open water, these boats would sink. In 2016, more than 4,500 people drowned or went missing in the Mediterranean.

An increasing proportion of the rescues were carried out by private organisations. By 2016, nine separate charities, from global aid agencies such as Save the Children and Médecins Sans Frontières (MSF) to smaller, newly formed groups, patrolled international waters close to Libya.

The Iuventa quickly gained a reputation as one of the more daring rescue outfits. “Saving people from drowning is always a humanitarian act,” Simon told me, “[but] I was going there as a political activist because I don’t agree with European border policies.” While the Iuventa put its speed and agility to use at sea, Jugend Rettet’s volunteers held protest actions on land, calling for “ferries not Frontex” – the provocative suggestion, with reference to the EU’s border agency, that migrants should be allowed to travel freely. 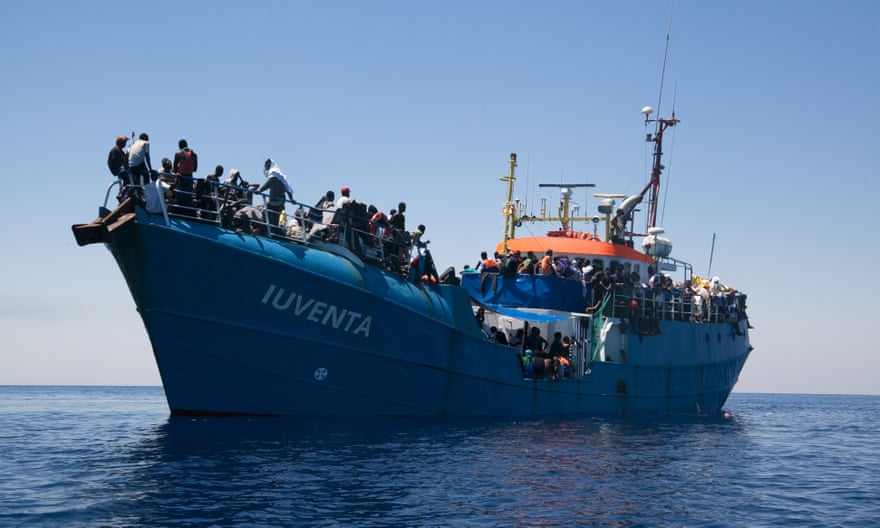