Home ACCIDENTS Work Proceeding to Remove Containers from ONE Apus After Casualty!

Work Proceeding to Remove Containers from ONE Apus After Casualty!

A month after the containership ONE Apus arrives back in Kobe, Japan after the incident during which it suffered one of the worst container collapses and loss overboard, work is progressing slowly to offload the cargo and commence repairs to the ship. 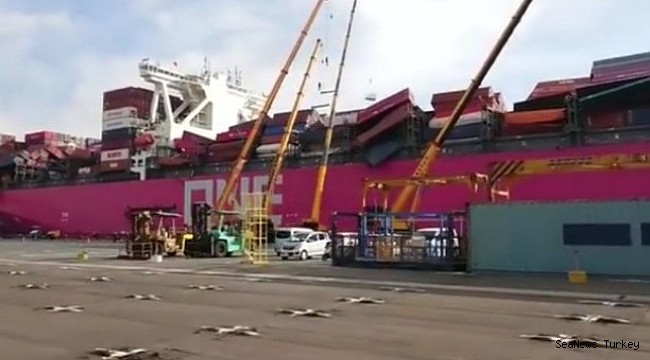 After a pause during the Japanese New Year holiday, work is proceeding on the intricate task of removing the dislodged and damaged containers.

While the total number of containers that were aboard at the time of the accident and how many will be offloaded in Japan has not been specified, only a small portion of the ship’s capacity appears to have been offloaded. Cargo claims consultancy WK Webster reports that “some of the containers discharged are virtually destroyed, whilst others are in relatively good condition.” They reported to their customers that there has been no advance list of containers to be discharged so their surveyors have remained at the port to conduct external, visual inspections as containers are discharged.

By the end of December, ONE reported to customers that a total of 126 boxes had been safely discharged. Between December 30 and January 4 work was suspended for the holiday resuming on January 5. After three additional days of work, the number had increased to 212 boxes and Webster reported to clients it was up to 232 containers as of January 8.

Webster reports that “the observed rate of container off-loading has actually increased slightly since the resumption of operations,” after the holiday break. However, ONE reports that they are simultaneously carrying out repairs on-deck which requires special safety precautions for the two efforts running concurrently.

Since the initial reports of floating debris in the Pacific possibly from the ONE Apus, there have been no additional confirmed reports of containers in the ocean. This contributed to the belief that the majority of the 1,816 containers reported loss overboard sunk. There have been no reports of an effort to search for and retrieve any debris.

In the meantime, Webster says that it continues to examine the drone footage it took when the vessel arrived in Japan as well as tracking information and meteorological data to assist in understanding the cause or causes of the casualty. 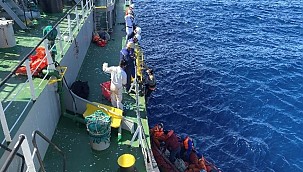