MUSLIM insurgents ISIS (Islamic State) have enlarged their footprint in Libya having taken control of another town, Harawa, east of Sirte, according to MAST, British maritime security contractors. 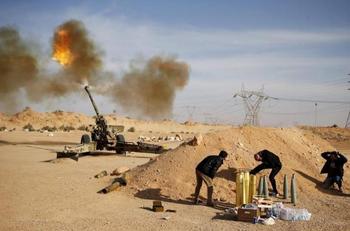 MUSLIM insurgents ISIS (Islamic State) have enlarged their footprint in Libya having taken control of another town, Harawa, east of Sirte, according to MAST, British maritime security contractors.

"The area is currently under the control of a local militia leader and ISIS has entered into discussions with him about future of the area," he said.

The war in Yemen continues with the Saudi led air campaign in its 11th week. The UN is attempting to broker peace talks between the ousted government and the Houthi forces that now occupy the capital of Sana'a.

The Houthis, who take their name from the late Hussein Badreddin al-Houthi, who launched an insurgency in 2004, have succeeded in a taking over the Yemeni government in 2014, says Wikipedia.

It has also occupied significant part of Yemen's territory and tried to conquer Aden, the second most important city of the country.

The ousted government, with backing of Saudi Arabia, is demanding that the Houthis retreat from all cities they have taken.

The Houthis have launched a Scud missile into Saudi Arabia, but the Saudis have claimed that it was intercepted by two Patriot missiles.

Scud missiles, especially the old ones, are not a danger to shipping, said Mr Northwood. "They are ground-to-ground missiles that target a fixed position - quite inaccurately - rather than a moving target," he said.

An Iranian ship, backing the Houthis, carrying aid has left Iran on its way to Yemen, issuing warnings to the Saudi Coalition after bombs from air strikes landed close to their Embassy in Sana'a.

Al-Qaeda in the Arabian Peninsula is also expanding its footprint in Yemen and now controls Al Mukalla, a city and port in South East Yemen.

Egypt to inaugurate Suez expansion August 6, but unsure when it opens