Home SHIPBUILDING The tugs built by Sanmar have reached the Orkney Islands!

Tugboats named Odin of Scapa and Thor of Scapa, built at Sanmar Shipyards which is the world-famous construction facility, reached Orkney Islands and their names were formalized with a ceremony. 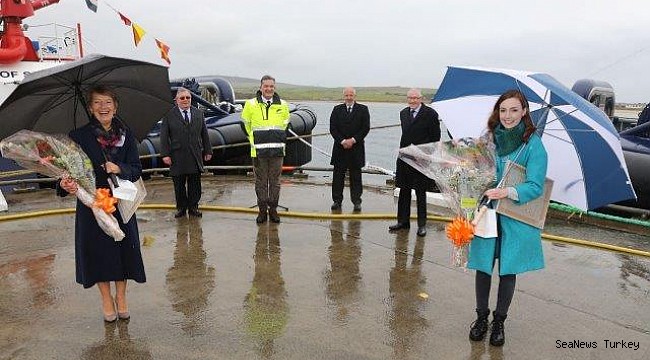 The two new 32-metre tugs, which cost £6.1 million each, were built at Sanmar Shipyards of Turkey – a world-renowned tug building facility. They arrived home to Orkney during September after a 17-day, non-stop voyage of 3,500 nautical miles.

Orkney’s two new tugs were officially named Odin of Scapa and Thor of Scapa during a ceremony at Scapa Pier on Monday.

Odin of Scapa and Thor of Scapa – named following a public poll of the islands’ residents – will replace two of the three older tugs in the OIC fleet.

OIC Head of Marine Services, Transport and Harbour Master, Jim Buck, said: “These tugs represent the confidence of Orkney Islands Council in the future of the Islands Marine industry.  As the Harbours Authority, utilising our own resources and the income generated by successful attraction of  business to Orkney, we have managed to procure two of the most efficient, environmentally conscious tugs available on the current market.

Tug Naming - Hazel“Odin of Scapa and Thor of Scapa represent  a commitment to the people of Orkney to create sustainable, viable harbours with the ability to move towards a low carbon, green maritime future and these tugs are the first steps on that generational transition.”

Key features include a shallower draft, a free running speed of 14.3 knots and 78.5 tonnes of bollard pull, with a wheelhouse designed with a single split control station which provides maximum all-round visibility and exceptional visibility to the bow and side fendering.

Both vessels have transferred to the UK Ship’s Register and Flag and been issued with the MCA Safety Management Certificate. Crew familiarisation continues as other operations within the Flow allows and they will enter full service once this is complete.

Tug Naming - GroupCouncillor Graham Sinclair, chair of OIC’s Development and Infrastructure Committee, said: “The naming of ships is always an exciting and memorable event and the naming ceremony today is no exception. It is exciting looking forward to all the new commercial opportunities for Scapa Flow that lie in the years ahead; and will become memorable as the crucial role of these powerful, purpose-built tugs becomes apparent.”

OIC Convener Councillor Harvey Johnston added: “The naming of ships is an ancient maritime tradition that goes back thousands of years.  It confers upon vessels an identity which often becomes integrated into local culture and folklore, and in this case has a tangible link with our Norse heritage.

“Odin of Scapa and Thor of Scapa will bear these proud names as they go about their business of facilitating safe and efficient maritime operations in Orkney waters.

“Today’s naming ceremony marks the induction of these vessels into our fleet where they will not just maintain but enhance our high and well-earned reputation in the maritime sector.”