Home ACCIDENTS The captains of Wakashio disaster blames each other!

There’s a clear spat developing at a court in Mauritius between the captain of the Wakashio bulk carrier and his chief officer. 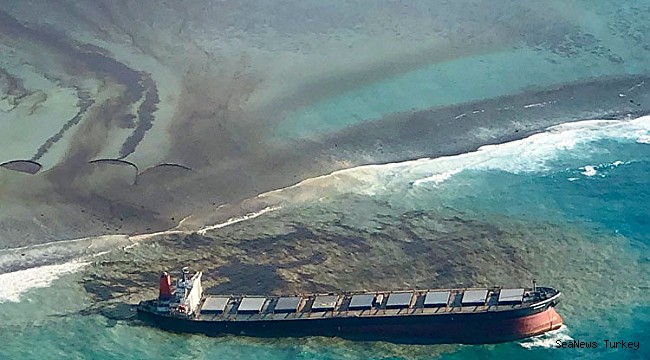 Proceedings are underway looking into how the giant Mitsui OSK Lines-operated newcastlemax ran aground on a reef off southern Mauritius last July.

Sri Lankan chief officer Hitinamillage Tilakaratna Subodha told the court last week told that the master had diverted the ship’s course to get closer to the Mauritian coastline in search of a wifi internet connection, something he did regularly around the world.

For his part, Sunil Kumar Nandeshwa, the ship’s Indian captain, grilled by prosecutors for the last two days, has heaped the blame for the terrible ecological tragedy that followed in the wake of the grounding on his first officer.

Nandeshwa said today that he had gone near the coastline at Subodha’s request and it was the chief officer who had not followed his instructions when passing by the island. He also admitted that no one had been on lookout at the time the ship grounded.

Yesterday, the Wakashio captain revealed he had sailed close to the Mauritius coastline 10 to 15 times, saying one time in early 2019 when he had come within five miles of the coastline the local coast guard had got in touch to check the ship’s routing.

Also in court yesterday was the chief engineer, Preetam Singh, who recounted the exact moments of the grounding on July 25. He was on the bridge, sitting in the pilot’s chair, checking something on his mobile phone.

Operations to remove the stern of the ship have been hampered by poor weather this week.
The reason cited, according to the release, was “to enter an area within the communication range of mobile phones”. Moreover, MOL revealed the crew were using a nautical chart without sufficient scale to confirm the accurate distance from the coast and water depth. In addition, MOL said a crewmember neglected appropriate watch-keeping, both visually and by radar.