The vessel was due to arrive in the United States on Saturday, but now it is heading back toward the Spanish port of Algeciras near Gibraltar. 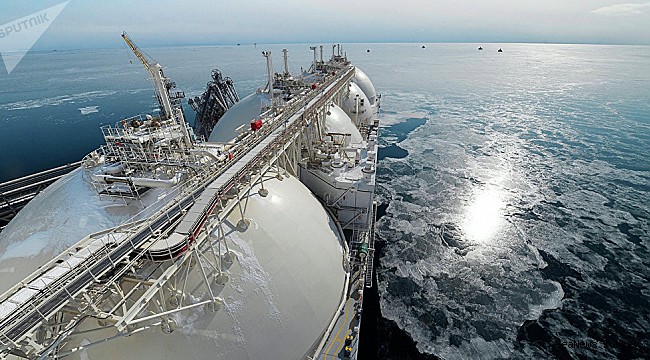 The vessel was due to arrive in the United States on Saturday, but now it is heading back toward the Spanish port of Algeciras near Gibraltar.
A tanker carrying Russian-produced liquified natural gas (LNG) has turned back while on a trip in the Atlantic, a day before it was scheduled to deliver the shipment on the US East Cost, Bloomberg reported, citing ship-tracking data.

The data shows that the Gaselys vessel is now heading toward the Spanish port of Algeciras near Gibraltar and should arrive there next week.

The vessel is carrying a cargo from the Isle of Grain terminal in Britain meant for the Everett regasification terminal near Boston.

The tanker is owned by the French energy company Engie. However, earlier this week the Russian business daily Kommersant reported, citing sources, that the gas had been produced at the Yamal LNG plant in Russia.

"The LNG cargo that ENGIE Gas & LNG recently purchased was loaded onto a tanker from ENGIE’s fleet at the Isle of Grain facility in the United Kingdom. Isle of Grain is a large global import/reexport facility receiving LNG from nearly all exporting countries, and is well situated to serve markets on either side of the Atlantic," Carol Churchill, a spokesperson with the Engie's office in Boston, said in an emailed statement to Sputnik.

Earlier, Russia's Novatek, which co-owns the Yamal LNG project, said the company sold the gas to a trader, after which it is no longer responsible for its movement.

"Yamal LNG sold the gas to our trading partner Novatek Gas & Power. In turn, the company resold the gas to Malaysia's Petronas, after which we have no relation to the shipment. We just sold it and this is it. We don't know what will happen to this gas in the future," Novatek spokesperson Yury Melikhov told the newspaper Izvestia.

The shipment was due to the cold temperatures that hit the northeastern US earlier this month, driving up gas prices to an unprecedented $6,300 per thousand cubic meters.

"Given the exceptionally cold temperatures and resulting high gas demand in the US Northeast, ENGIE Gas & LNG purchased this spot cargo to supplement our other contracted supplies from Trinidad," Churchill said.

According to Bloomberg, the situation is unusual, but sometimes it happens that a tanker carrying an LNG cargo which is not tied to a contract with fixed destination changes course en route as owners wants the highest price and the best market.

Kommersant reported that the shipment contradicts Washington's energy policy which is aimed at turning the US into a major LNG-exporting country. According to data from the US customs service, it is the first shipment to the Everett terminal since 2014. Experts, however, suggested that this shipment is unlikely to become a new trend and rather indicates the increasing globalization of the gas market.