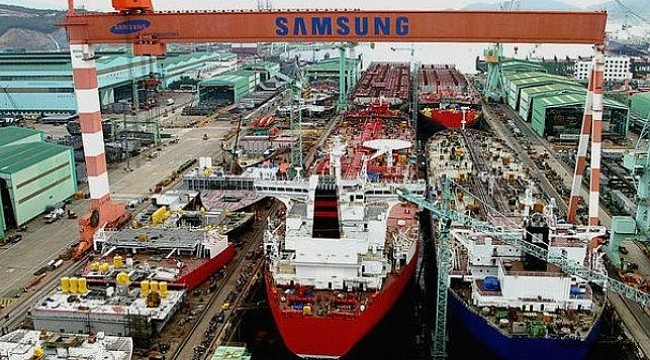 Samsung Heavy Industries has secured its largest order ever, and it's something of a mystery.

The firm announced Monday that it has booked a $2.5 billion order for "blocks and equipment" for an unnamed European buyer. It is the biggest single contract it has signed since its founding in the 1970s, and it amounts to nearly 40 percent of last year's total annual sales.

The nature of the product was not disclosed, but most observers believe that it is associated with a Russian government-backed order for 15 icebreaking LNG carriers at the newly-rebuilt Zvezda Shipyard outside Vladivostok. The vessels will be privately owned, but the Kremlin has incentivized the project's shipowning and chartering partners to order from a Russian shipyard.

As Zvezda has not built an LNG carrier before, it has contracted with Samsung for the design and for technical assistance for the first five ships in the series. The first steel was cut at the Zvezda yard last Friday, and delivery is scheduled for 2023-2026.

The charterer, Russian LNG producer Novatek, has also asked for permission from the Kremlin to order ten more hulls in the series from a non-Russian shipbuilder. If approved, that order is expected to be worth about $3 billion, and it would likely accrue to Samsung.

Samsung has previously built icebreaking cargo vessels for Russian buyers - notably a series of three double-acting icebreaking oil tankers for Sovcomflot delivered in 2005. The Samsung icebreaking LNG carrier design is new, and it is intended to improve performance in ice over the previous generation.

“These vessels will significantly contribute to the development of cargo traffic along the Northern Sea Route, which is strategically important for Russia," said Russian deputy prime minister Yury Borisov in a statement.

Sanmar Delivers the First of a Pair of Unique Ice-breaking Tugboat!