THE Panama Canal Authority has renewed its Memorandum of Understanding (MOU) with the port of Miami, extending their 13 year-plus alliance to promote trade opportunities and share best customer practices. 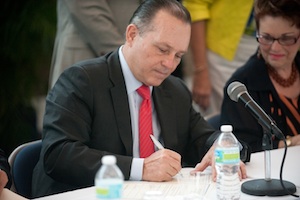 18 July 2016 - 21:36
Panama Canal Authority and Port Miami renew MoU to boost trade
THE Panama Canal Authority has renewed its Memorandum of Understanding (MOU) with the port of Miami, extending their 13 year-plus alliance to promote trade opportunities and share best customer practices.
The renewal of the MOU is said to demonstrate the value of the Panama Canal and its commitment to US east coast ports.
It also coincides with a ceremony held by the port of Miami to celebrate the arrival of the MOL Majesty, the first Miami-bound Neopanamax vessel to transit the expanded canal.
Commenting on the signing of the MoU Panama, canal administrator Jorge Quijano said at the ceremony: "For the first time, we have these mega vessels transiting our waterway and calling at your port. This groundbreaking development will undoubtedly bring economic prosperity, as well increased opportunities and revenues to both Port Miami and the Panama Canal."
Port Miami has been investing in a number of critical infrastructure improvements to deepen its channel to accommodate Neopanamax vessels, and improve the traffic flow and movement of the cargo it receives.
With the new locks now operational, Neopanamax ships have begun transiting the waterway towards US Gulf and east coast ports, such as the ports of New York, New Jersey and Houston. Neopanamax ships transiting the Panama Canal have also headed to ports in Asia and the Caribbean, such as Cartagena.
This news 1309 hits received.