IMPORTED containers in Mexico crew 3.1 per cent year on year to 984,149 TEU from January to May, Secretaría de Comunicaciones y Transportes, or SCT, reports IHS Media. 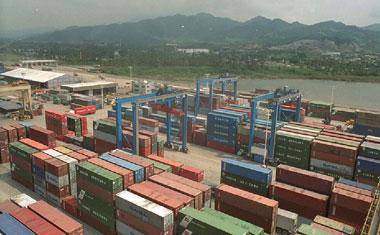 18 July 2016 - 21:36
Mexican box volume up 3.1pc January-to-May as world prospects darken
IMPORTED containers in Mexico crew 3.1 per cent year on year to 984,149 TEU from January to May, Secretaría de Comunicaciones y Transportes, or SCT, reports IHS Media.
These goverment numbers do not include domestic container movements. L:Exported loaded TEUs fell by the same percentage to 621,775, according to the SCT figures. Overall traffic for the five months was up 0.6 per cent to 1.6 million TEU .
"The decline in exports of containerised trade volume reflects weakness in demand in Asia, Europe and elsewhere in Latin America as those countries struggle to sustain growth in 2016," said, Paul Bingham, vice president at Boston's Economic Development Research Group.
"The growth in containerised imports is consistent with a growing Mexican economy, partly due to imports of intermediates used in manufacturing for export," Mr Bingham said.
"The US economic growth has supported growth in the Mexican economy, including Mexican imports from overseas that supply factories manufacturing goods for final consumption across North America."
Imports at the nation's biggest port, Manzanillo, on the Pacific Coast, which handled about 45 per cent of laden containers through Mexican ports from January to May, fell 0.6 per cent year on year to 450,565 TEU.
Exports of laden containers through the port also fell 10 per cent, to 271,728, over the same period a year before. Manzanillo was ranked highest among Mexican ports in the Journal of Commerce's North American Top 25 in 2015.
Trade through other Mexican ports has been stronger. Laden imports via Lazaro Cardenas grew nine per cent to 200,115 TEU, according to SCT figures. Lazaro Cardenas was the second-busiest Mexican port and up 21.5 per cent to 89,077 TEU, from January to May. Overall laden traffic through Lazaro Cardenas was up 12.5 per cent to 289,192 TEU.
The national volume increase came amid a solid performance by the Mexican economy, as the weak global economy led to diminished exports. The biggest volume of goods for import into Mexico, by dollar value, came from the US, China, Japan, South Korea and Germany, according to Wisertrade, a Massachusetts-based online international trade data and statistics database.
About half of the dollar value of goods into Mexico comes from the United States. The greatest volume of Mexican exports by dollar value went to the US - which received goods worth nearly 30 times as much as second-placed Canada, Wisertrade figures show. The other top recipients were China, Brazil and Columbia.