The uptake of pilot and demonstration projects is a vital step in pushing forward the transition to zero emission fuels for the maritime industry. The second edition of the Getting to Zero Coalition’s Mapping of Zero Emission Pilots and Demonstration Projects demonstrates the scale and diversity of projects already underway. 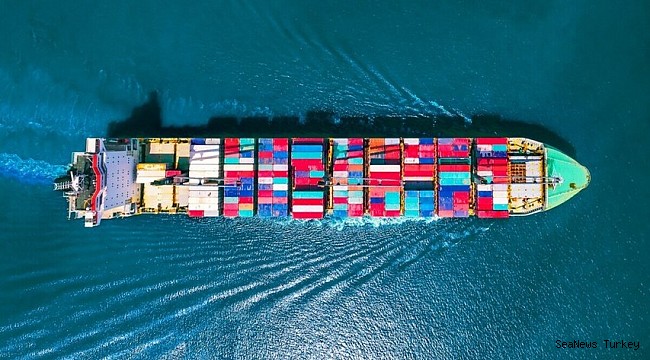 The projects have been categorized in terms of their geographical focus, project focus, project type, fuel choice, and the existence of public funding. By applying and comparing these metrics, we can draw some initial conclusions in terms of some of the key trends emerging in shipping’s decarbonization.

Overall, the mapping demonstrates that significant work is underway on several different fuels, with no clear preference shown for a single fuel across the mapping. As noted above, however, it is possible to see some trends emerging with regard to fuel production, small ship technology and large ship technology projects. 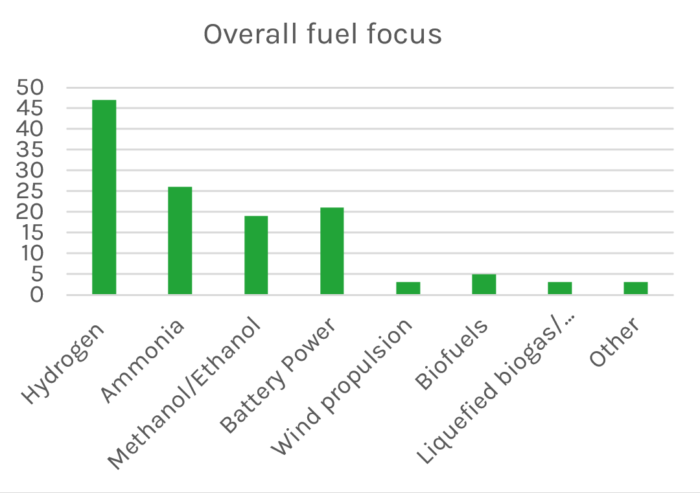 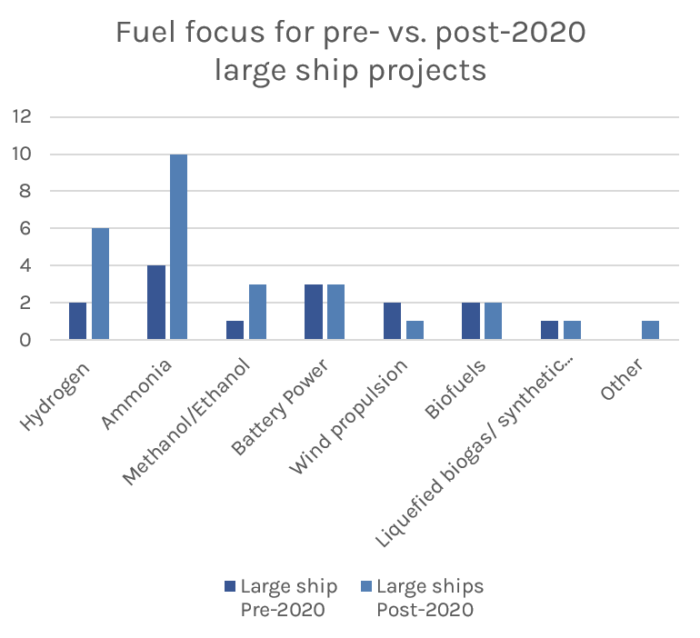 The most significant trend we are seeing with newer large ship technology projects is the post- 2020 increase in the uptake of large ammonia vessels. Since the first mapping was released 6 months ago, we have received 4 additional large ammonia ship demonstration projects and are now seeing some of the first orders for these vessels being placed.

The mapping also saw an increase with methanol/ethanol projects, with some large methanol tanker vessels now being built to run on methanol in addition to transporting it. This is a further development from the previous mapping, where the biggest methanol vessels were large passenger ferries.

It is worth noting that the majority of battery powered large ship projects anticipate using batteries as an auxiliary source of power, rather than as the main means of propulsion. This is also the case for a few hydrogen projects addressing the use of fuel cells as a source of auxiliary power.

In terms of the smaller vessels in the mapping, we are seeing less of an acute transition towards new fuel types. As was also reflected in the first edition, there appears to be a preference towards using hydrogen, battery power or a combination of the two onboard small ships. 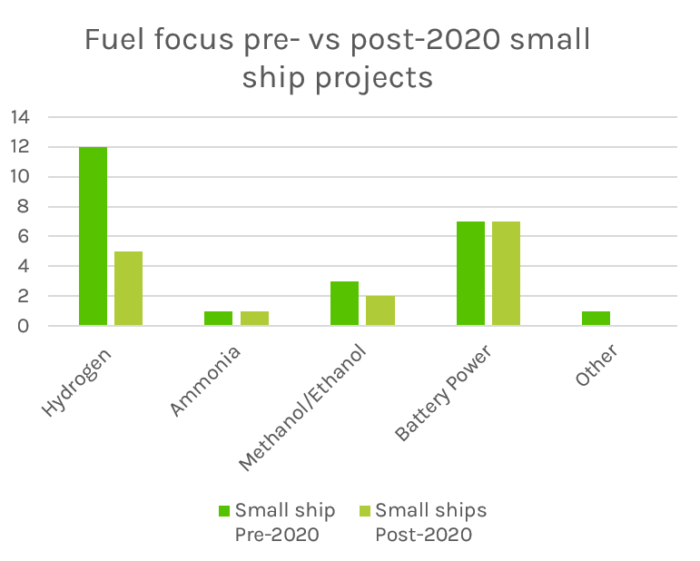 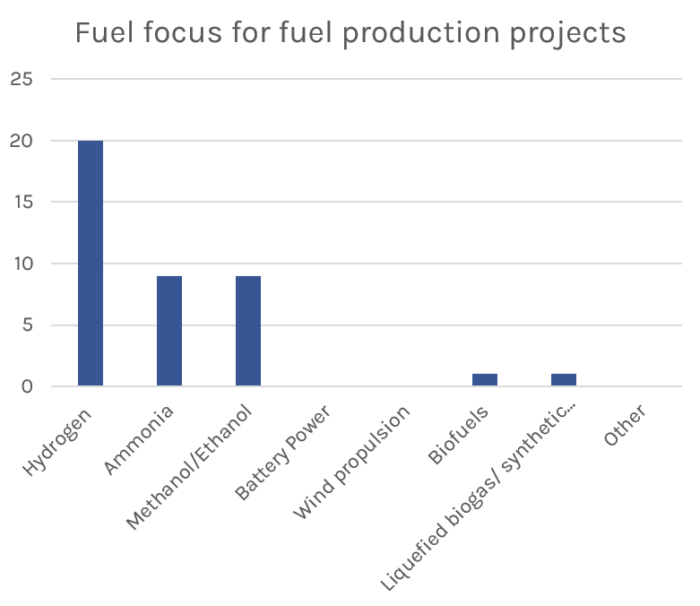 Part of the reason for hydrogen’s statistical significance is that where a project focuses on multiple fuels, it will be counted twice for the purposes of the data. As hydrogen is an input for the production of both ammonia and methanol/ ethanol, many projects, particularly on the fuel production side, will show a hydrogen component in addition to another fuel. Despite this, the mapping still shows a strong preference for projects focusing on the production of hydrogen and hydrogen derived fuels for the maritime industry.

In terms of geography, most projects in the mapping have a significant connection to Europe (71), with Norway, the Netherlands, Denmark and Belgium all having over 10 projects in the mapping. Since the first edition, the geographical spread of the mapping has become more representative, which is reflected in the increase of Asian projects from 16 in the first edition to 31 in the second. This is due both to an improvement in terms of research methods as well as a recent proliferation of projects originating from Asia. In Asia, the majority of projects come from Japan and China, with a number also coming from South Korea. 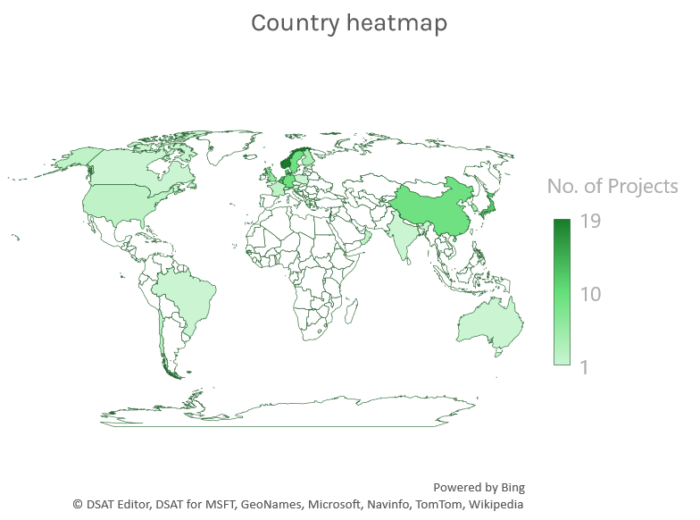 The mapping has also seen an expansion in the number of countries who are now pursuing pilot projects relating to shipping decarbonization, with new projects emerging from countries in, for example, South America and Asia since the last edition.

In the last 6 months, we have seen around 10% of the projects from the first edition announce new phases of development, increases in size or ambition or move from concept study stage to demonstration stage. This shows that within the projects we have gathered there appears to be a tangible move towards raising ambition and scaling up existing projects.

Of the 106 projects in the mapping, just over half (54) of all projects received some amount of direct public funding to the project. The majority of this funding originates in Europe, with a lower proportion of projects from other geographies, particularly with respect to Asia, typically receiving public funding. 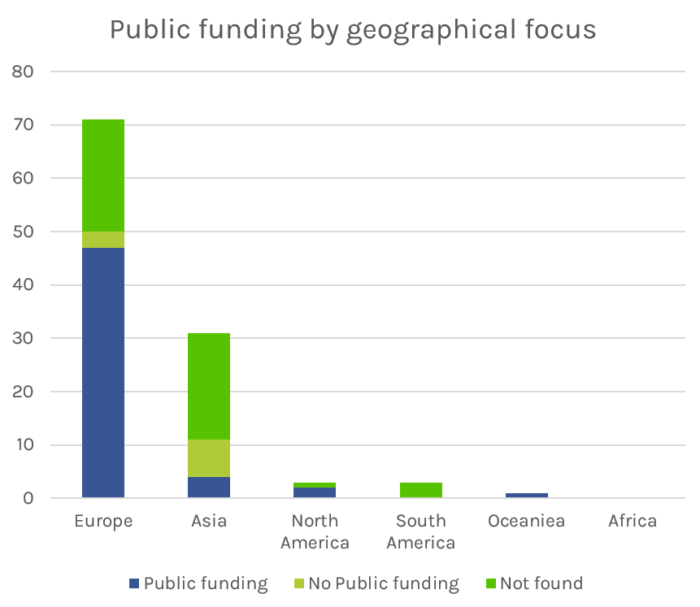 It is worth noting that the existence of public funding was only counted where there was a direct award of funding to the project. This doesn’t count public funding where one of the partners is a public entity or when the project was partially funded through other sources of funding like subsidies. This can partially explain the lower amount of publicly funded projects outside of Europe, which frequently have public support, but not necessarily direct funding awards in the same way as is done, for example, through the EU. 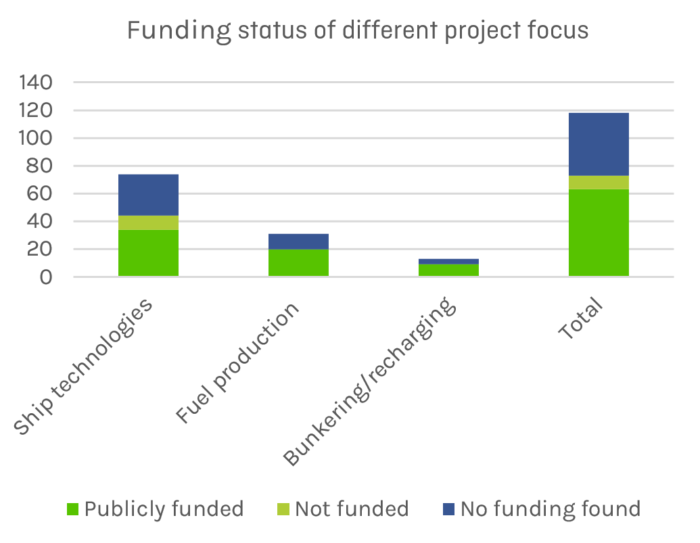 We hope that by continuing to develop a better understanding of the scale and diversity of zero emission pilot projects already underway, the mapping can continue to raise ambition in working towards a transition to zero-emission fuels for the maritime industry. In this way, we hope that the mapping can provide some support to potential first movers in helping them to draw upon learnings from other projects and improving confidence in undertaking these projects.

We encourage stakeholders from across the maritime spectrum to send us information about new projects or projects we have missed in order to improve the quality and validity of the findings.

We would like to thank all the members of the Getting to Zero Coalition, who have provided us with information about the projects they are involved in. Without their contributions the mapping could not have been produced.

The Mapping of Zero Emission Pilots and Demonstration Projects will be updated on a continuing basis by the Getting to Zero Coalition, with future reports being released biannually.