A new trade route for energy supplies is opening up north of the Arctic Circle as some of the warmest temperatures on record shrink ice caps that used to lock ships out of the area. 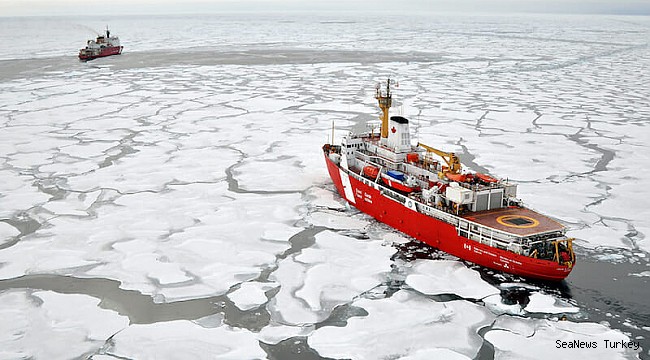 A new trade route for energy supplies is opening up north of the Arctic Circle as some of the warmest temperatures on record shrink ice caps that used to lock ships out of the area.

This year is likely to rank among the top 10 for the amount of sea ice melting in the Arctic Ocean after heat waves across the northern hemisphere this summer.

While that’s alarming to environmentalists concerned about global warming, ship owners carrying liquefied natural gas (LNG) and other goods see it as an opportunity. Their cargoes traversed the region for the first time this year without icebreakers, shaving days off shipping times and unlocking supplies from difficult-to-reach fields in Siberia.

More navigable waters are a boost for Russian President Vladimir Putin’s effort to expand his nation’s reach in the gas market and for energy companies such as Total SA and Novatek PJSC, which are leading Arctic developments. They also help reduce shipping costs for LNG, benefiting buyers and traders of the fuel from PetroChina Co to Gunvor Group Ltd.

“There is a growth trend for volumes transported via the Northern Sea Route this year,” said Mr Sergei Balmasov, head of the Arctic Logistics Information Office, a consultancy in Murmansk, Russia. “The reason is an increase in LNG exports.”

While shorter shipping journeys reduce emissions, environmentalists are concerned that more traffic through the Arctic will add to the amount of black carbon – particles of pure carbon – settling in the snow from tanker smokestacks.

When that soot darkens the surface of the ice, it speeds up the warming process by absorbing more of the Sun’s energy.

And with the shipping season through the Arctic starting earlier and ending later, tankers will spend more time in the area and spew more of their pollution onto the ice.

Turbulent weather in the area also churns the seas, making it almost impossible to clean up anything that’s spilled. The International Maritime Organisation is considering rules that would ban burning heavy fuel oil in Arctic waters, extending restrictions already in place in the Antarctic.

“It’s a major concern for us because as the ice melts we are seeing more and more shipping,” said Mr Sian Prior, lead adviser for the Clean Arctic Alliance, an environmental group.

Scientists are seeing a rapid change in the Arctic. The Bering Sea between Alaska and Russia lost about half its ice coverage during a two-week period in February, while the most northern weather station in Greenland recorded temperatures above freezing for 60 hours that month.

The previous record was 16 hours by the end of April 2011. The mercury topped an unprecedented 30 deg C north of the Arctic Circle on July 30 in Banak, Norway.

Ice begins melting in the Arctic as spring approaches in the northern hemisphere, and then it usually starts building again towards the end of September as the days grow shorter and cooler.

A total of 5.7 million sq km of ice covered the Arctic in July, according to the Colorado-based National Snow & Ice Data Centre (NSIDC). Through the first two weeks of August, ice extent declined by 65,000 sq km each day, according to the NSIDC.

“The ice has been retreating by about 10 per cent every decade during the last 30 years,” said Dr Miguel Angel Morales Maqueda, senior lecturer in oceanography at Newcastle University in northern England.

“There is no other known explanation than climatic change. If it isn’t climactic change, then we don’t know what it is.”

This season is likely headed for the the ninth biggest retreat since satellite measurements began, not as extreme as bigger melting seasons in 2012 and 2007, according to Dr Julienne Stroeve, professor of polar observation & modelling, University College London.

“The total ice extent loss is being slowed by winds pushing the ice southwards,” Dr Stroeve said in a message sent from an Arctic research trip. “We likely still have a month of sea ice retreat. The ocean is still warm enough to melt some ice even if air temperatures cool.”

LNG exporters are taking advantage of the open waters, most notably around the Yamal LNG gas liquefaction plant in northern Siberia. The project owned by Total, Novatek and their Chinese partners has custom-built ARC 7 tankers rugged enough to cut through whatever ice remains in the area.

The Yamal venture’s Christophe de Margerie was the world’s first ice-breaking LNG tanker built, and collected Yamal’s first cargo to make the the trip westwards through the Northern Sea Route.

In early 2018 though, the Eduard Toll became the first LNG tanker to ever use the full Northern Sea Route in the winter. It travelled from a South Korean shipyard to Sabetta and collected cargo there from the Yamal LNG plant, then delivered it to France. That shaved about 3,000 nautical miles off the traditional route through the Suez Canal.

In July, China received two cargoes from Yamal from the first LNG ships to cross the Arctic without help from ice breakers. The net voyage time from the port of Sabetta through the Northern Sea Route to the destination the Chinese port of Jiangsu Rudong was completed in 19 days, compared with 35 days for the traditional eastern route via the Suez Canal and the Strait of Malacca.

Routes like that may save Yamal US$46 million (S$62 million) in shipping costs for the remainder of the year, and those savings could quadruple by 2023, Bloomberg NEF said in a note.

Traffic is picking up. The Northern Sea Route saw 9.7 million tonnes of cargo shipped through it in 2017, according to the Russian Federal Agency for Maritime and River Transport. There were 615 voyages along the Northern Sea Route this year through July 15, about the same as in 2017, said Mr Balmasov at Arctic Logistics.

The Russian government is targeting cargo traffic through that route totalling 80 million tonnes by 2024.

“The main difference to 2017 is LNG deliveries from the port of Sabetta,” Mr Balmasov said. “Our data show that as of early July, 34 tankers were dispatched from Sabetta towards European ports, and one voyage was east-bound.”

Since then, two more ships have moved from Yamal to Asian markets in the east, though the most icy part of the Northern Sea Route.

The Egyptian court did not allow Ever Given to leave!
Related News
Most Read News
Recent Comments
First Conversion of RoPax Ferries to LNG Operation Announced