Rescue workers recovered the bodies of 32 people after a launch carrying over 100 passengers capsized in Buriganga river at Dhaka's Shyambazar this morning, fire service sources said.

Family members identified 31 of them and took the bodies away. One body remained unclaimed at the morgue till the filing of this report.

Morning Bird, which was coming to Dhaka from Munshiganj, capsized in the river after it was hit by another launch Moyur-2 near Sadarghat launch terminal around 9:30am, said Shahadat Hossain, a duty officer of the fire service headquarters.

The launch was reportedly carrying over 100 passengers, according to local police.

A rescue vessel of BIWTA from Narayanganj reached the spot and was conducting salvage operation.

Masud Hossain, a survivor, said he was travelling from Munshiganj in a cabin with his uncle while his other uncle was on the lower deck of the launch.

"As I realised something bad has happened, I called my uncle immediately to come out. By this time, the launched capsized. It took no more than five minutes to sink," he said.

"I thought I'm going to die today… I could somehow manage to open the window of the cabin and come out. Situation didn't even allow me to look for my uncle sitting next to me," he lamented.

Talking to The Daily Star in the afternoon, he said rescuers have already recovered the body of his uncle Afzar Sheikh but his other uncle Bachchu Sheikh was still missing. 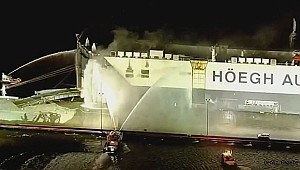