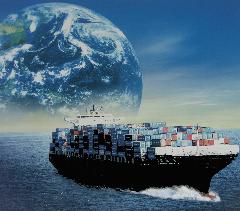 "Traditional shipping finance has not changed - it's gone," he said, adding that the German KG system that financed 30 per cent of the ships afloat is no more.

"There will be some PE (private equity) activity, but it will be an opportunity for Asian finance," he said as their economies grow more robust, with other emerging markets, while aging, mature economies slow down.

Mr Widdows, also CEO or Rickmers Group, and a former CEO of APL and NOL, said these trends will hit trade flows as intra-Asia, rather than east-west trades, not only dominate global shipping in terms of tonnage, but in dollar volume.

Mr Yeo spoke of the huge political, cultural and social impact of China on ASEAN economies, adding that China's plans were political as well as economic, saying it planned to lay in infrastructure throughout the region that would remove physical and bureaucratic barriers.

Mr Yeo took a benign view of such developments saying that China's interests were entirely peaceful, while conceding that India had concerns.

"China will re-unite us," he said. "Today, there are 128 countries which name China as their most important trading partner. These changes are of enormous historical importance."

KPMG's Mr Zatouroff said logistics development as well as infrastructure would be key to progress in the ASEAN bloc, with a burgeoning e-commerce driving growth through popular demand.

"It is not profitable yet," he said, giving an example of customers ordering three television sets all offering "free returns" and having selected one model, send the other two back.

"This not only adds cost of returning the sets, but repackaging them for re-sale, which is a cost that will have to absorbed," he said.

"In Britain, we benefit from infrastructure investments made 150 years ago, but such a financial window would be a hard sell to a modern corporate," he said.

Mr Yeo, inspired by China's infrastructure building, pointed out that so many highways and railways have been laid to the borders of south east Asia.

As to finance, he imagined quid quo pros with Beijing financing and road extension in Thailand in exchange for buying its rice surplus or offering electricity to Laos for a right of way.

The panel was asked a question about the varying level of skills of the people of the ASEAN and how that would be handled.

Mr Yeo urged greater cultural sensitivity, pointing out that the bloc was composed of many religions - "50 per cent is Muslim" - and said each culture had different ways of speaking and meaning, even to what contracts meant.

There were pitches for more education and more state spending to fix what is ailing in national skills sets.

He then told the story of opening up an office years ago in Shanghai and more recently in Chongqing, where he found western Chinese workers highly motivated and outclassed the Shanghai crew. "In Chongqing, productivity was off the charts!"