As the Covid-19 pandemic and the travel restrictions put in place to attempt containment drag on, around 200,000 merchant seafarers are trapped aboard ships in violation of international law. 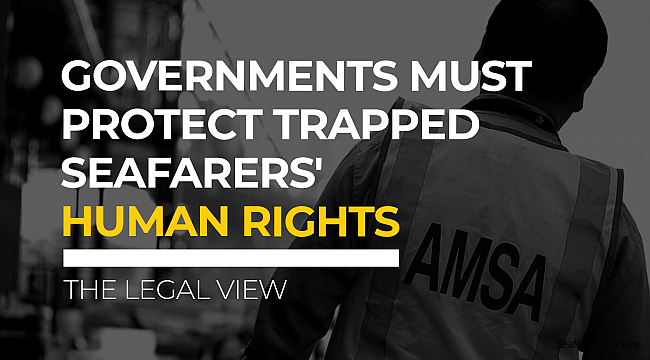 As the Covid-19 pandemic and the travel restrictions put in place to attempt containment drag on, around 200,000 merchant seafarers are trapped aboard ships in violation of international law. Each month, the 100,000 seafarers due to be relieved of their duties on board the ships transporting 90 per cent of the world’s goods, are being abandoned by the international community. Many have now been on board without access to shore leave for months beyond their original contracts. This not only contravenes international maritime regulations in place to protect the life, health and welfare of seafarers and avert environmental disaster, but amounts to an egregious mass breach of human rights raising concerns over the forced labour of this invisible workforce.

Industry bodies, including the International Chamber of Shipping (ICS) and Joint Negotiating Group, as well as the UN Secretary General, the ILO and IMO are in agreement with the International Transport Workers’ Federation, and supported by Pope Francis, that at the end of their contracts, seafarers are fatigued physically and/or mentally and not fit to safely perform their duties. Repatriation and replacement is the only responsible course of action.

In May in the context of the ongoing Covid-19 pandemic, a group of UN Special Rapporteurs noted that “forcing vulnerable workers with little choice but to endure conditions that put them at risk, including by dismantling previously established labour rights, can constitute a form of forced labour according to the ILO”.

Established labour rights of seafarers under the Maritime Labour Convention(MLC), often referred to as the ‘Seafarers’ Bill of Rights’, include the right to shore and annual leave for the benefit of their health and wellbeing and to be repatriated after a maximum period of service of 11 months (one year less one month’s compulsory leave; see A2.4.3; A2.5.1 paragraph 2(b)). If a ship owner fails to make these arrangements, the flag state shall arrange for repatriation; a port state or a labour supplying state may repatriate and claim reimbursement from the flag state; but in any case, a port state shall facilitate repatriation (A2.5.1, paragraphs 5(a), 7). Despite these state duties to take positive action to fulfil these rights, governments are strictly denying territorial access or transit, and abandoning seafarers.

It is of note that agreement to waive annual leave is expressly prohibited in the MLC, except in specific limited cases: a seafarer is generally unable to consent to renounce these rights even where they are paid in lieu of leave. This is due to the fundamental importance of paid annual leave to protect the health and wellbeing of seafarers and to prevent fatigue; but also the particular isolation of seafarers, corresponding susceptibility to coercion, and the vigilance necessary to prevent abuse and exploitation once on-board. In its March 2020 joint statement, the ILO Special Tripartite Committee (STC) of the MLC noted that the inherent stress, isolation and social pressures of the seafarer experience are clearly exacerbated by Covid-19, which is having an adverse impact on mental and physical health and wellbeing. According to the UN Special Rapporteurs, depriving these already vulnerable workers of choices in a situation of increased risks could already indicate forced labour.

Further, ILO Convention 29 defines forced labour as “all work or service which is exacted from any person under the menace of any penalty and for which the said person has not offered himself voluntarily.” The menace of a penalty can entail a wide range of acts, from physical violence to psychological coercion to retention of papers, among others. Here, seafarers are being told that they will be abandoned in a foreign port without the possibility of repatriation if they do not agree to a contract extension. In not signing, seafarers face the additional risk of loss of future job prospects. These significant risks constitute a clear penalty for the purposes of Convention 29. Further, wherever consent to work is given under the threat of a penalty there can be no voluntary offer. Seafarers are being given no effective choice but to sign the contract extension.

Moreover, even if a seafarer initially consented, it may still be considered forced labour if they cannot withdraw their consent without fear of suffering a penalty. Further, the initial consent may be rendered null where the voluntary nature of an offer is negated by subsequent events, such as the going back on a promise to repatriate on a specified date.

Abusing this vulnerability in recruiting seafarers to extend their contracts for up to 17 months at sea, coupled with their precarious legal situation and inevitable dependency on their employer in situ could also give rise to a situation of human trafficking for the purpose of labour exploitation. Where trafficking is found, consent is irrelevant. Under the Protocol to Prevent, Suppress and Punish Trafficking in Persons Especially Women and Children, supplementing the United Nations Convention against Transnational Organized Crime (the “Palermo Protocol”), trafficking can include the “recruitment,…[or] harbouringof persons…by means of the abuse of power or of a position of vulnerability…for the purpose of exploitation…[including] forced labour”. In these terms, the potential gravity and risk of exploitation of seafarers can be fully appreciated.

Without denying the accepted agency, influence and responsibility of business actors throughout supply chains, in this very particular current impasse, employers hiring the seafarers are effectively powerless to arrange crew changes without concerted, bona fide state cooperation. Flag, port and labour supplying states are breaching their international human rights duty to protect(in addition to their duty to help fulfil the right to repatriation) where they fail to take appropriate steps to prevent effective forced labour.

In particular, according to the 2014 ILO Protocol to Convention 29, states, including prominent member flag states such as Panama, “shall cooperate with each other to ensure the prevention and elimination of all forms of forced or compulsory labour”. The Palermo Protocol also requires cooperation between states in the fight against trafficking. The International Covenant on Economic Social and Cultural Rights demands international assistance and cooperation in realizing the rights to the highest attainable standard of physical and mental health, and just and favourable working conditions, among others. More broadly, the MLC requires, and repeatedly emphasises the need for, states to cooperate to achieve implementation and enforcement of the set of seafarers’ rights enshrined therein (particularly relevant in this context is Article I.2 and Guidelines B1.4.1.3 and B2.5.2).

States are required not only to respect and fulfil human rights through their bodies, machinery and agents, but to actively protect against abuses committed by third parties, including employers. These duties are engaged wherever abuses may be committed within its territory or jurisdiction. The UN Guiding Principles on Business and Human Rights (UNGPs) confirm that states are in breach where they fail to take effective steps through policy and regulation to prevent abuses before they occur. States must also “review whether [the] laws provide the necessary coverage in the light of evolving circumstances and whether, together with relevant policies, they provide an environment conducive to business respect for human rights.”  As noted by the UN Working Group on Business and Human Rights, the state duty to protect human rights applies both under normal circumstances and in times of crisis.

Flag states are ultimately responsible for protecting seafarers under their jurisdiction from forced labour. Unfortunately, the majority of the world’s vessels are registered under flags of convenience (FOCs) as they generally have a more relaxed approach to regulation, including lower labour standards. Many FOCs have a poor record when it comes to meeting their obligations to crew members under international and domestic laws.

Many flag states claim that the pandemic renders compliance with some state obligations materially impossible, excusing failures under the generally accepted definition of force majeure in the International Law Commission’s Articles on the Responsibility of States for Internationally Wrongful Acts. Though the ILO sensibly called for a pragmatic approach to enable seafarers to extend their contracts where necessary, this was set within a primary appeal for swift and smooth crew changes, limited to a “reasonable [extension] period”, and conditional on the “fundamental requirement…in all cases” of the seafarer’s free consent in conditions that allow a review and the seeking of advice. The above limits on a seafarer’s ability, in ordinary circumstances, to consent while at sea, cast serious doubt on the ability to consent in this predicament.

Furthermore, the very high threshold for material impossibility cannot be made out against the backdrop of other government action, both political and financial, either unilateral or in concert with other governments to secure the repatriation of its own or other state’s non-seafarer citizens. The fact that the same level of diplomatic pressure has not been applied to secure crew repatriations demonstrates that further material steps could, and should, be taken to avoid or mitigate the current situation and its consequences. Over the course of the pandemic, and with increasing regularity as restrictions have eased in recent weeks, several governments and companies have used chartered and commercial flights to repatriate their citizens and, in a small handful of cases, this has included seafarers. It is, therefore, clear that it is not impossible to facilitate international travel for seafarers. As travel restrictions ease further, this excuse becomes increasingly untenable.

Finally, under the MLC, for example, derogations or exemptions by governments must be decided in consultation with the social partners, with any determinations made reported to the ILO. Without this vital protection, it should be assumed in the first instance that the relevant government intends to comply with all of its obligations under the Convention.  Unless flag states have expressly derogated from treaty obligations, it is untenable that they be able to enjoy a blanket force majeure defence. Moreover, as an element of modern slavery, forced labour in breach of one of the eight fundamental conventions of the ILO must be considered a serious breach of peremptory norms, for which there is no defence nor derogation.

Flag, port and labour supplying states must urgently and publicly commit to implement the industry’s Recommended Framework of Protocols for Ensuring Safe Ship Crew Changes and Travel During the Coronavirus (Covid-19) pandemic, ease travel restrictions for these “key workers”, and facilitate the safe passage of seafarers home via their sea and air ports. All states must engage their influence through all diplomatic channels to secure the same pledge from other states and coordinate action with their relevant ministries and agencies, in order to respect, protect and fulfil the human rights of seafarers during this crisis.

Until such a time, even without an imminent possibility for disembarkation, seafarers have every right to refuse further contract extensions, and remain on-board as passengers until their right to repatriation is granted. Seafarers are not expendable. Their labour cannot be used to plug the failures of the international community to facilitate crew change nor can they be compelled to sacrifice their own rights to health, safety, family life and to be free from forced labour for the sake of global supply chains. Enough is enough.