EEXI will reduce CO2 emissions on bulk carriers by 6.6%

WORLD SHIPPING
23 November 2021 - 23:34
Comments
1 dk reading time
Print
A
Maximize
A
Minimize
Comments
Implementation of the Energy Efficiency Existing Ship Index (EEXI) would reduce CO2 emissions by an estimated 6.6% and carbon intensity by 4.6% on bulk carriers, according to a new study conducted by the Helsinki-based maritime software, services and data analysis provider NAPA.EEXI, which was adopted in June of this year and is slated to go into effect on November 1, 2022, with the requirement taking effect on January 1, 2023, assesses and restricts CO2 emissions per transport work based only on the ship’s design specifications. One of the most prevalent methods of complying with EEXI is to limit engine power.With this in mind, NAPA used real voyage data from more than 1,500 bulkers over 12 months in 2019. It examined the true operational profiles of vessels in actual weather conditions while analysing how much the maximum engine power limitation would have impacted these operations.The data showed that the engine power limitations required by vessels to comply with EEXI would only have come into effect at high-speed peaks and therefore, for most of the year, if EEXI had been in effect, vessel operations would have remained largely similar. The study also noted that the speed reductions required by EEXI would have reduced the transportation capacity by an average of 2% for bulkers, depending on the year in which the vessel was built.Teemu Manderbacka, lead research and development engineer at NAPA, said: “While this is a good start, it shows the gap between what EEXI can achieve and how much more ground there is to make up. It shows why, at MEPC 77, to truly match the level of ambition that has come out of COP26, the IMO member states will need to prioritise efficiency.” 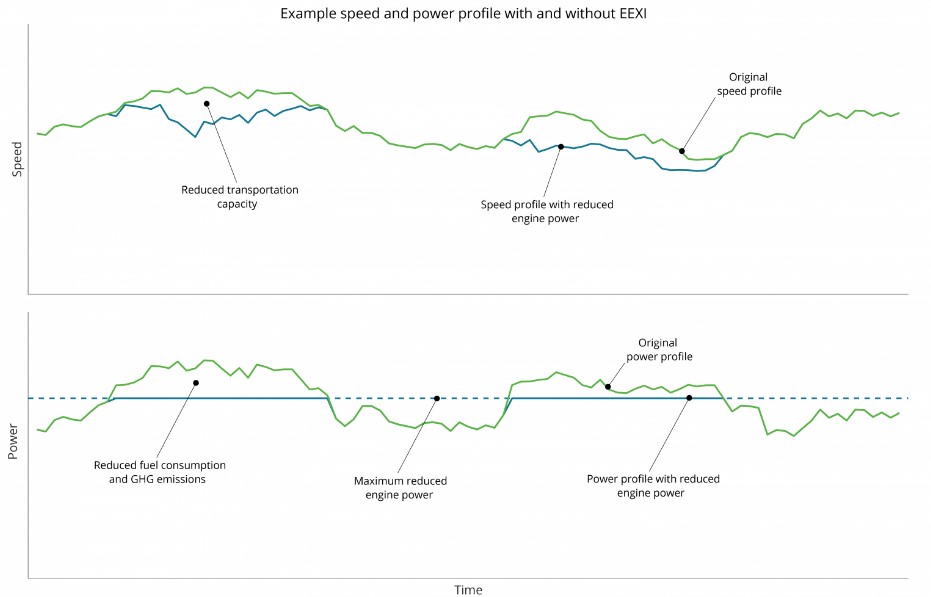