A slump in dry bulk shipping is set to worsen as the meltdown in global commodities and too many ships free for hire rock the sector used by investors to gauge the health of world trade. 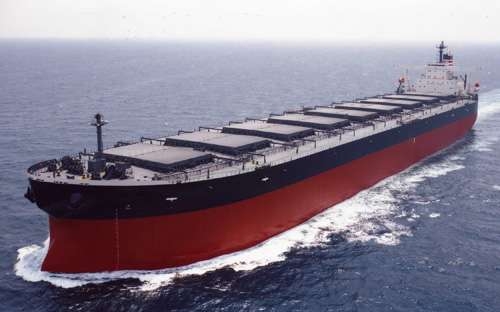 A slump in dry bulk shipping is set to worsen as the meltdown in global commodities and too many ships free for hire rock the sector used by investors to gauge the health of world trade.
Slower coal and iron ore demand from China – the world’s biggest industrial importer – have battered the dry bulk sector, already in the midst of its worst ever downturns that is expected to extend well into next year.
This week the Baltic Exchange’s main sea freight index , which tracks rates for ships carrying dry bulk commodities and seen by investors as a forward-looking indicator of global industrial activity, plunged to an all-time low.A slump in oil and other commodity prices, due to slowing Chinese demand, has widely been seen as one of the reasons for U.S. Federal Reserve hesitancy in tightening policy.
“Dry bulk demand is very much dependent on the world economy,” said Symeon Pariaros, chief administrative officer of Athens-run and New York-listed shipping firm Euroseas.
“The slowdown in the world economy has caused both dry bulk and container shipping to suffer a lot lately. Euroseas, having exposure in both these sectors, is facing the consequences of this very low rate environment.”
The Baltic’s BDI index, which gauges the cost of shipping resources including iron ore, cement, grain, coal and fertiliser, has dropped to 498 points and is over 95 percent down from its all-time high of 11,793 points in 2008 before the financial crisis first hurt the sector.
“Demand slowing down and (ship) supply continuing to increase are the reasons why we will see the BDI likely hit figures in the 400 point level, which would be absolutely uncharted territory for the market,” said Khalid Hashim, managing director of Precious Shipping, one of Thailand’s largest dry cargo owners.
JAPANESE CASUALTY
Worries over China and the health of the world economy have also pushed the 19-commodity Thomson Reuters/Core Commodity CRB Index to near 13-year lows in recent days, mirroring in part some of the pain felt by dry freight players.
“You can’t ignore the role of sentiment in the markets. Right now dry cargo shipowners’ heads are down and they are taking a daily battering at these earnings levels,” said Tony Foster, chief executive of British shipping asset manager Marine Capital.
“The market is clearly very weak in the short-term and 2016 is going to be very difficult.”There have already been casualties. In September, Japanese bulk carrier Daiichi Chuo Kisen Kaisha filed for protection from creditors. This followed private equity backed Global Maritime Investment Cyprus Ltd, which filed for Chapter 11 bankruptcy protection in the United States.
While prospects for commodities markets are shaky, the dry bulk freight players will also need to contend with more ship deliveries hitting the water in coming months.
“More vessels have to be scrapped, no additional newbuildings (new ship orders) and further delay deliveries – all these take time, more than one year, implying that in the interim the market will be ugly, and a great number of shipowners will not have the cash to bridge the weak market,” said Basil Karatzas, head of New York consultancy and brokerage Karatzas Marine Advisors & Co.“Some may be flexible to get money from funds for working capital … and otherwise sacrifice some equity to save the business, but many small shipowners will be washed out.”Source: Reuters (Editing by Veronica Brown and William Hardy)