The dry bulk market is facing its worst slump in more than two years, falling by 4.75% yesterday to reach 1,544 points.. 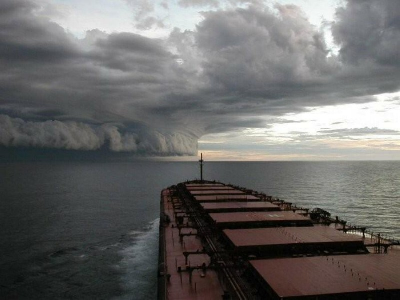 The dry bulk market is facing its worst slump in more than two years, falling by 4.75% yesterday to reach 1,544 points, on top of an additional 4.2% fall on Wednesday. Except Panamaxes which managed to post some gains of 3.18%. Just yesterday,

the benchmark Capesize segment lost a whopping 8.14%. According to analysts, this downturn has mainly come as a result of record floods in Australia, which have resulted in a severe disruption of coal shipments, which has further worsened the current flurry of tonnage supply.

Commenting on the Capesize market, Fearnley’s said that “declines were further accelerated by typhoon and flood hitting west, respectively East Coast Australia, with resultant partial paralysis of iron ore and coal exports. Pacific spot activity thus close to negligible, with spot rates dropping, so far, to around usd 13k for index types on rounds. Speculations of necessary alternative geographical sourcing for metallurgical coal into China have so far only resulted in soaring commodity prices, and the Atlantic basis remains uneventful on a combination of low cargo volumes and a flow of ballasters. The Brazil/China ore run has dipped below usd 20 pmt, equivalent to less than usd 10k net on modern tonnage coming from China. Average daily earnings stand at around usd 16k, down 38% m-o-m. To the extent that operators dare to book period tonnage, index-linked rate structures are much in vogue and recently concluded on 3 known units” said the shipbroker.

"We do see the fundamentals are strong enough to support better rates than the current levels but not too much above the current levels," said Georgi Slavov, head of dry research and structured products at ICAP Shipping in a story from Reuters. "There will be rallies and downward pressure again. It is going to be sideways to downward pressure for the next three to six months" he mentioned. Fearnleys said preliminary estimates for net fleet growth in 2010 reached 16 percent. "This year could be as high as 17 percent," Svenning said.

In its latest report, it commented that – in the panamax market – “after a week of holidays, the Atlantic market started off on a positive trend with a short list of vsls able to load mid January cargoes. How long this will last is more uncertain as ballasters from the Feast will pick a fight for the end January/early Feb cargoes. TA round voyages fixed around usd 21k p/d and fronthauls paid usd 27-28k. In the Pacific a more bearish tone appeared. Prompt deliveries fixed at USD 7-8k for Pac rounds, and Indonesia round were reported at usd 6k p/d. The backhaul market has been more or less silent, even though a LME was paid only usd 3250 via Suez!” the broker said.

Meanwhile, in the smaller handysize segment it’s been a quiet week as expected after the holiday season. “Most actors should be gradually back on the market this week and this will tell us where the market is heading, although negative sentiment is already prevailing across the board due to lack of cargo availability and too many ballasters. Charterers are therefore expected to maintain a ´wait and see´ attitude in order keep the pressure. Owners are resisting fixing business back to the F.East. Continued lack of sufficient activity in Bl.Sea and Cont. The USG should become firmer as more grain shipments are expected end January. A quiet start after the holidays with numerous prompt vessels in the East. Vessels ex China via Indo to India can expect to receive somewhere around the 9-10k level, with a tick less for Indo rounds. Nopac rounds have been seen to be fixed around the 9k level bss ex China with Charterers currently talking numbers starting with 8´s. Seeing several looking for backhaul or staying in Atl if already there” concluded Fearnley’s.