Seasonal factors like the worst flooding in Australia’s Queensland in half a century, coupled with thin trade activity has put the dry bulk market on a downward trend. 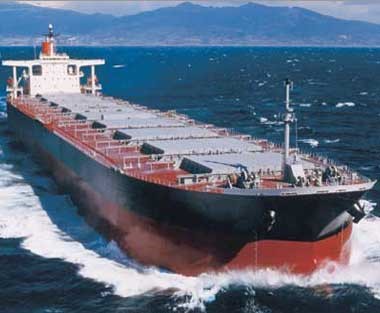 Seasonal factors like the worst flooding in Australia’s Queensland in half a century, coupled with thin trade activity has put the dry bulk market on a downward trend, with the industry’s benchmark, the Baltic Dry Index (BDI) beginning the year exactly like it ended. The BDI was down yesterday by 80 points to reach 1,693 points, among the lowest it’s been since 2009.

Wha’t even more disappointing this time around is that the downward pressure made no exceptions whatsoever as to which sectors it will affect. All various ship segments were down yesterday, reflecting a slump of demand across the board, with the most resilient market until now, the Supramax one taking most of the heat.
According to the latest weekly report from Shiptrade Services, the Capesize market has remained subdued, as was expected. “All fixtures intended to be concluded before the end of the month, were covered in the previous week, leaving very little to report this week. The adverse weather conditions in Australia which have created a chaos across many ports and upset coal exports, has also influenced the market negatively. Prices contracted remain on the same levels as last week. 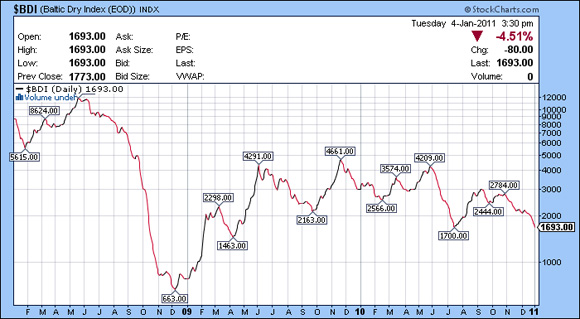 In the Panamax market the same theory applied as activity was also low. The Pacific is still seeing an overcapacity issue which paired with the current limited demand, is keeping the sentiment down. On the contrary the Atlantic is being maintained on healthier levels. Transatlantic trips are still hovering around the low 20s as per last week. The Supramax sector was also quiet this week. No fresh enquiry was recorded in the Mediterranean and Black Sea. The market seems to have adopted a passive approach as most seem eager to see what the next week will bring. Owners in the Far East have been fixing their vessels on levels similar to the previous week where the opportunity arises, but this is very infrequent and they generally prefer to wait until further enquiry enters the market into the New Year, said the shipbroker”.

In a separate report from Bloomberg, Queensland’s floods are expected to further reduce dry bulk rates, as buyers of Australian coal are already cancelling ship charters. According to the story, “Queensland ships about 180 million metric tons of coal a year, or about a fifth of the global total, according to Sverre Bjorn Svenning, an analyst at Fearnley Consultants A/S in Oslo. The dry-bulk fleet grew 17 percent last year, outpacing an 11 percent increase in haulage demand, the research unit of London- based Clarkson Plc, the world’s biggest shipbroker, estimates.

In terms of ship acquisitions, Shiptrade reported that sales were at very low volumes, whilst there weren’t any price changes. With the absence of BDI reports since Christmas Eve, purchase enquiries declined merely due to seasonality. “However, based on individual regions changes since last week were not dramatic. In the bulker sector Handy size vessels were the popular with Handymax and Panamaxes following closely. In the wet sector MR tankers dominated purchase enquiries whereas other sizes ranged from very low to null levels. Among the two reported sales was a resale Supramax from STX Dalian yard in China with delivery in 2011. The price is said to be USD 32 Mill but the buyers remain undisclosed. VLCC tanker “Front Shanghai” (271,978 DWT built in 2006 in Nantong, CHN) was reported sold for xs USD 91,25 bill with TC bacl at 35,000/day for two years to undisclosed buyers”, said Shiptrade.