Container shipping’s orderbook-to-fleet ratio, which was in single percentage figures as recently as six months ago, is set to surpass 15% as shipping lines pile on the tonnage with Alphaliner suggesting IMO’s 2050 decarbonisation deadline and ship lifespans are beginning to play into the minds of owners. 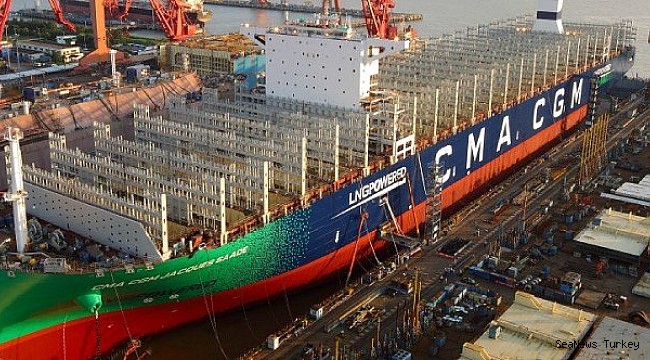 Box shipping’s vessel orderbook-to-fleet ratio had steady decreased from 30% in 2010 to 8.8% six months ago.

However, according to Alphaliner, low interest rates and strong competition between shipyards have eventually lined up to prompt non-operating owners, lessors, and ocean carriers to get aboard the newbuilding train. The ratio today stands at 14.2% and will likely climb above 15% shortly when mooted orders are confirmed.

Orders over the past six months have been predominantly for 12,000 teu, 15,000 teu and 24,000 teu class ships with no interest for mid-sized tonnage. Excluding some 20 orders for ships for the intra-China trade, the current orderbook in the 4,000 to 10,000 teu range stands at a mere three vessels.

Canada’s Seaspan has been the top owner contracting for tonnage with 31 ships on order. Japan’s Shoei Kisen is in second with 16 ships. In terms of yards, China’s Yangzijiang has been the clear winner with contracts for 25 boxships, including its first megamaxes. South Korea’s Samsung Heavy Industries is in second place with 19 boxships on its books.

The spate of boxships ordered over the past six months is also seeing radical shifts in the global liner rankings. When including their orderbooks, Mediterranean Shipping Co (MSC) is now on track to overhaul Maersk as the world’s largest liner, while France’s CMA CGM is on schedule to reclaim third spot from China’s Cosco. Another notable climber in the Alphaliner top 100 carrier rankings when factoring in orderbooks is Evergreen from Taiwan. The carrier, which boasts the largest containership orderbook in the world, is set to jump past Japan’s Ocean Network Express (ONE) and Germany’s Hapag-Lloyd into fifth spot when all its ships deliver, so long as its rivals do not sign for more ships in the interim.