China’s navy is sending a ship to snag its people out of Libya, as the country teeters on the brink of civil war. China has redeployed the 4,000 ton missile frigate Xuzhou from its anti-piracy mission in the Gulf of Aden to assist in the evacuation of its nationals from Libya. 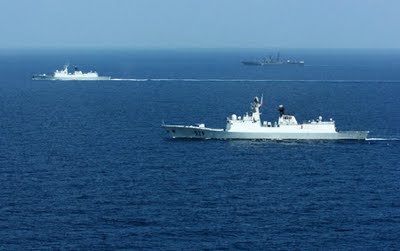 We’re used to seeing the U.S. Navy pull American citizens out of warzones. Now, China’s navy is doing the same thing — sending a ship to snag its people out of Libya, as the country teeters on the brink of civil war.

China has redeployed the 4,000 ton missile frigate Xuzhou from its anti-piracy mission in the Gulf of Aden to assist in the evacuation of its nationals from Libya. It’s the “the first ever dispatch” of a Chinese navy vessel to run a “non-combatant evacuation,” China SignPost’s Gabe Collins and Andrew Erickson note.

The move underlines the growth in Chinese naval power, Collins and Erickson write. And with a number of Chinese workers employed in potentially unstable countries around the world, the evacuation likely serves as a dress rehearsal for future crises.

China has already evacuated some 12,000 of its 30,000 nationals in Libya, flying some to nearby Egypt and placing others on chartered passenger lines. Pressure for a swift exit has grown as the Chinese National Petroleum Corporation (CNPC) reported attacks against its oil facilities in Libya, though the company’s 391 employees are reportedly unharmed.

China joins a number of countries who’ve sent military ships or aircraft to evacuate their citizens from the growing violence in Libya. Britain’s Royal Navy has sent a destroyer to Libya to remove British oil workers currently stranded in the country.  South Korea has also diverted a warship from its nearby anti-piracy mission to assist in the evacuation of its citizens.

In Tripoli today, Libyan leader Moammar Gadhafi made an appearance in the city’s Green Square, giving a defiant speech amidst a supportive crowd.

His comments follow a rambling, incoherent speech made by phone on Libyan state TV yesterday in which Gadhafi blamed the uprising on al-Qaeda and Osama Bin Laden lacing young peoples’ Nescafe with drugs.

Despite the welcome Gadahfi received for his speech and the government-issued talking points given to prayer leaders demanding quiet, protesters left Friday prayers today and marched on the capital and were met with random gunfire from the Libyan security forces awaiting them.

Benghazi, Libya’s second largest city, has already fallen to anti-government forces. A number of former army officers who have defected from the Gadhafi regime pledged to send forces to help oust the government from power. The Wall Street Journal quoted a Libyan army colonel and defector in Benghazi: “We will not stop until we liberate the whole country.”

The bodies of dead sailors from the "Alexander" arrived in Russia