A few days ago VLOC Vale Beijing was towed off the berth to avoid risk of foundering alongside the Vale iron ore loading terminal at Ponta Madeira, having earlier reported ingress of water to a partly loaded cargo hold. 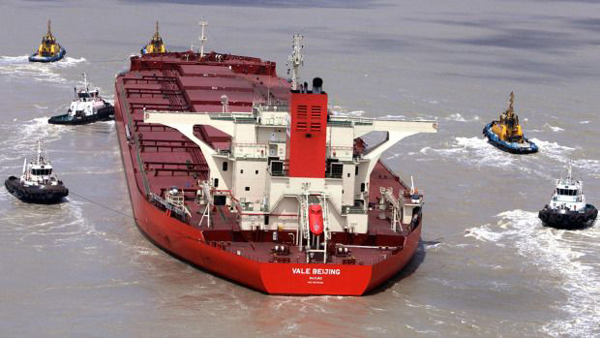 Good news and bad for Vale as the Old Year gave way to the New. First the good news: after a six month delay since these columns told of the maiden voyage of VLOC Vale Brasil at long last a Valemax VLOC (Berge Everest) gained China entry to discharge iron ore from the Vale conglomerate’s Brazil minefields.

The bad news, also coming before Christmas, concerned another of their juggernauts, Vale Beijing. A few days ago VLOC Vale Beijing was towed off the berth to avoid risk of foundering alongside the Vale iron ore loading terminal at Ponta Madeira, having earlier reported ingress of water to a partly loaded cargo hold. According to Lloyd’s List  a full hull scan by robot device confirmed cracks to the hull with the ship’s three ballast pumps working around the clock to contain the flow. What is the extent of the damage to the Vale Beijing? Vale Beijing Structural Damage In a few words, the hull plating was found to have cracked in the vicinity of a water ballast tank, and from there water was making its way into a cargo hold.

Vale Beijing is classed by DNV whose preliminary inspection reportedly described (in addition to the crack in outer hull plating) fairly substantial internal damage to web frames and longitudinals in the vicinity of the water ballast tank. Informed opinion considers such damage a likely consequence of excess localised stresses in the hull structure sustained while loading the heavy ore. An available dry-dock capable of handling the 362 m (1,188 ft) long VLOC is being sought.
Vale Contingency Plan for Shipping Ore to China

Reuters New Agency reports a Vale contingency plan should China revoke its decision to allow Valemax ships to enter their harbours on safety grounds.  They have it in mind to moor a large floating storage vessel (one of the Vale fleet perhaps?) in Subic Bay in the Philippines where iron ore would be transhipped the comparatively short remaining distance to China in smaller bulk carriers. If forced to take this option in order to reach a vital market Vale would give up much of the economic advantage it had set out to gain.
This news 22957 hits received.
ANASAYFAYA DÖNMEK İÇİN TIKLAYINIZ
These news may also interest you