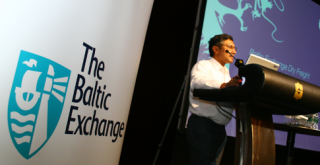 03 April 2016 - 17:02
Baltic sea freight index up on higher rates for bigger vessels
The Baltic Exchange’s main sea freight index, tracking rates for ships carrying dry bulk commodities, extended gains on Friday, helped by higher rates for bigger vessels.
The overall index, which factors in rates for capesize, panamax, supramax and handysize shipping vessels, jumped 21 points or about 5 percent to 450 points. The index has gained about 55 percent since touching its lowest of 290 points on Feb. 10.
Seasonal strength in demand may continue to drive freight rates moderately higher through the second quarter, the Singapore Exchange (SGX) said in its monthly freight report.
“The South American grains season has started to support rates for smaller vessel classes in recent weeks, while stronger iron ore shipments may also boost Capesize rates in the near-term,” the SGX report said.
The capesize index gained 75 points, or about 28 percent, to 345 points.
Average daily earnings for capesizes, which typically transport 150,000-tonne cargoes such as iron ore and coal, were up $495 to $3,013 on Friday.
The panamax index was up 34 points, or about 7 percent at 535 points, its highest so far this year.
Average daily earnings for panamaxes, which usually carry coal or grain cargoes of about 60,000 to 70,000 tonnes, rose $267 to $4,275.
This news 3010 hits received.