The Baltic Dry Index, a gauge of global shipping rates often seen as a leading economic indicator, has slipped below 1,000 points, joining the downward journey of stocks, currencies and commodities worldwide. 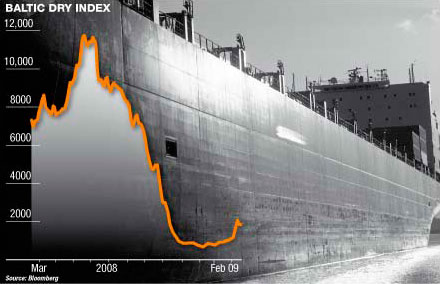 The Baltic Dry Index, a gauge of global shipping rates often seen as a leading economic indicator, has slipped below 1,000 points, joining the downward journey of stocks, currencies and commodities worldwide.

On Friday, BDI, which tracks transport costs on international trade routes for dry bulk commodities such as coal and iron ore, fell to 994 points. The index, which had hit its lowest at 509 points on 18 February, recovered to 951 points on 15 July, and later climbed above 1,000.

“I hope it does not fall further. But it looks like BDI will further slip from the current point,” said an executive at Mumbai-based private shipping company, which has both dry bulk ships and oil tankers. He declined to be named.

Shipping has always been an international business, not a local one, he said, pointing to several factors including China which are pulling the index down.

Fears of the Chinese economy having a hard landing have pummelled commodities worldwide. According to Caixin-Markit, China’s flash purchasing manager’s index for manufacturing dropped to a six-year low of 47.1 in August, confirming a sharp slowdown.

The Bloomberg Commodity Index (BCI) hit a 16-year low on Monday, declining 17.7% year to date. The Thomson Reuters CRB Commodity Index is down 16.8% year, hovering around a decade’s lows.

“The oversupply in the dry bulk segment, along with weaker demand conditions particularly in China, kept freight rates low throughout financial year 2015. We expect the segment to be under pressure again in FY16 as overcapacity will persist and demand growth will remain subdued,” said Varun Awtani, analyst at India Ratings and Research Pvt. Ltd. “The dry bulk segment may continue to be under stress for the next couple of years.”

Companies including Shipping Corp., Great Eastern Shipping and Mercator have presence in the dry bulk segment.

Awtani said freight rates for offshore segment is also likely to be under stress as exploration and production companies globally have suspended or curtailed expansion plans due to lower crude oil prices, hurting demand for vessels in the offshore segment and leading to lower day rates and utilisation levels globally. The operating performance of companies in the segment is thus likely to weaken in financial year 2016. Companies servicing state-owned enterprises will also be affected in financial year 2016 even though state-owned oil companies are likely to continue offshore activities albeit at a lower intensity. This is because charter rates with shipping companies will be renegotiated at lower levels.

All the Indian shipping companies have presence in the offshore segment too.

However, there is some positive side to this freefall.

Freight rates for the tanker segment is better placed.

Global demand for tankers increased in the second half of financial year 2015 as the sharp drop in crude oil prices resulted in floating storage and onshore stockpiling, he said.

This, along with a rise in long haul trade due to an increase in crude oil purchases from Africa and Latin America by Asian buyers, led to an increase in spot freight and time charter rates which has continued into FY16, he said.

“However, the rates will come down gradually during the year as demand will not sustain at the current artificially high levels. Nevertheless, the decline will be limited only to moderate levels as the fundamentals of the segment have improved over the last couple of years with an improving demand-supply scenario. Operating profitablity in the tanker segment is likely to remain healthier than previous years,” he added.

Around 60% of Indian shipping fleet comprises of tankers.

Nevertheless, financials of Indian shipping companies may not improve as the improvement in the tanker segment will likely be offset by weaker performance in other segments.