It was an ordinary day for the passengers having their breakfast on 110 meters-long river cruiser River Countess, until an uninvited giant knocked the door. But it was their lucky day. If 275-meters long giant cruise ship MSC Opera did not hit the wharf before hitting the River Countess, the lives of 110 passengers and maybe half as much crew, would be in a grave danger. The boat was partly evacuated thanks to the continuous whistle signals blown by Opera, but if the ship crashed into the smaller boat, the boat would probably have sunk, costing many lives, similar to another disaster took days ago when seven people were killed and 21 were left missing after a small sightseeing boat was hit by a cruise liner on the Danube in Budapest.

How did it happen?

MSC Opera received her 2200 passengers from Bari, on 1st of June. Departed from Bari, Venice was the second leg of her 8 days round-trip in Mediterranean, starting and ending at Bari. At around 8:00 in the morning, the 275-meters long ship picked up pilot at Lido entering the total 6-nautical miles long group of channels. The voyage takes about 45 minutes with areas ship increasing and decreasing the speed. The ship was about a few hundred meters away from the final point where she would be berthed at the Stazione Maritime Pier, after a 45-degrees turn, when all on the bridge realized that something was going wrong. 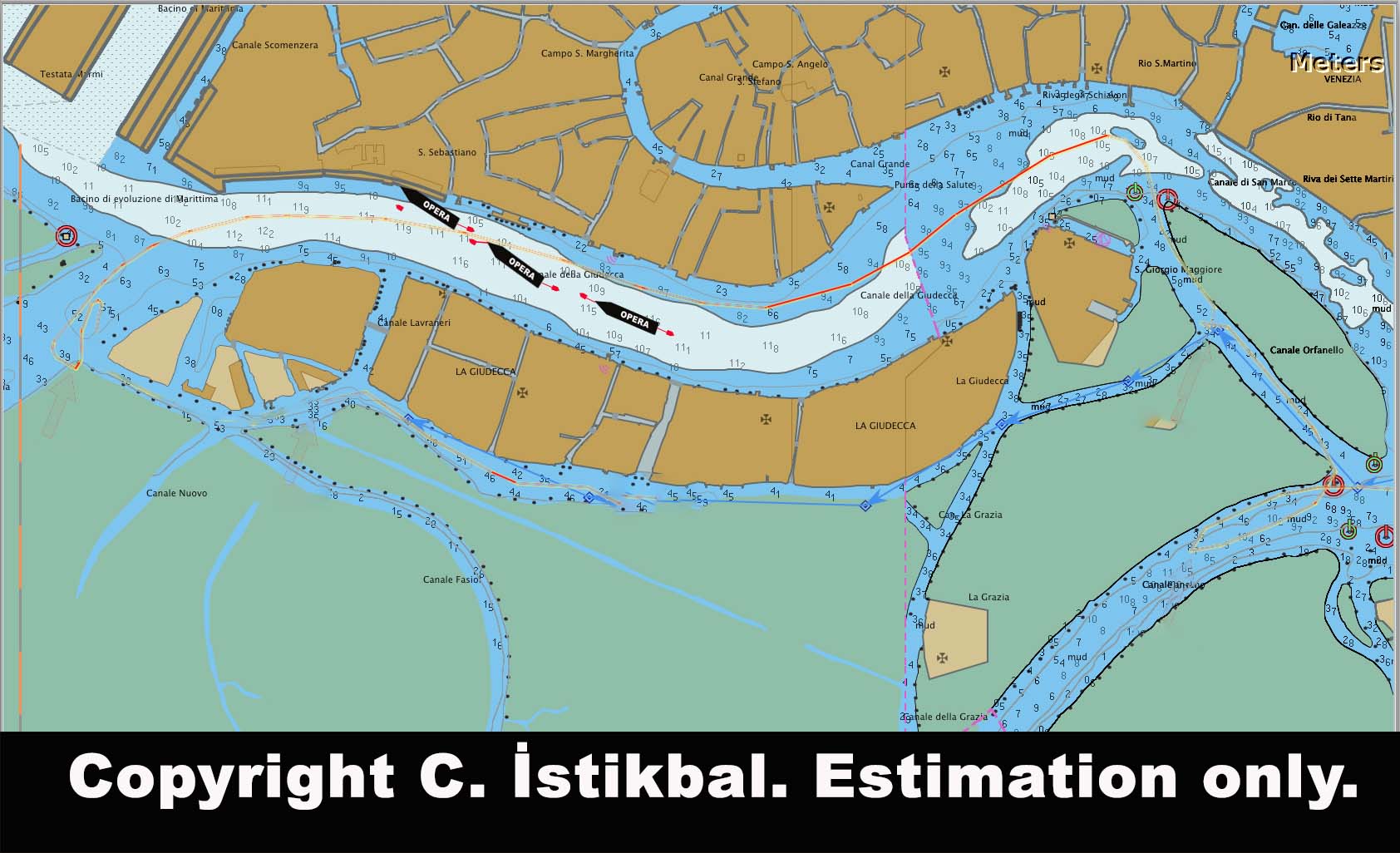 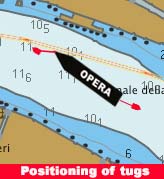 The MSC Opera was being assisted by two tugs. Lourdes-C, a 51-Tons BP Voith-system tug was connected at centre-lead on the bow, and 40-tons BP Ivonne C was connected at aft, again at the centre. Both tugs were connected in a Long-Tie basis.

Voice of the Pilot was heard at the VHF channel on nearby listening stations, as shouting “Tutto a sinistra, Tutto a sinistra, emergenza”, which was an order to, probably both of the tugs, bow and stern, to pull the vessel towards her port side in full strength. At that moment, the ship was only 100 meters away from No.29 pier at San Basilio, and approaching with 30 degrees, which is accepted as a perfect angle to get alongside to any berth.

I watched various video footages from different angles. I am confident with what I saw, that the propeller thrust was on before and during the time of accident. The forward tug, with long-tie on, was pulling with a 60-degree according to Ship’s axis. The stern tug, connected with long-tie, stern-to-stern with the ship, was giving braking effect to the ship. Both anchors were already dropped and were holding on, but probably being dragged by the ship with little effect.

The situation of the ship reminds me of the situation which is known by maneuvering masters and pilots as “donkey-like effect” in which, the ship does not want to obey the applied forces to alter her drifting direction and insists on her present course. The situation was exactly the same for MSC Opera. The ship did not answer any of the forces applied, except probably the braking force applied by the stern tug. The reasons for this may include:

1-    The counter force applied to the hull from the port bow of the hull by the deeper seaside water;
2-    The negative vacuum effect created by the shallower starboard side made the ship lean towards starboard, in short, the bank effect, which is explainable by Bernoulli Principle,
3-    The dropping of both of the anchors created an uncertainty so that probably the starboard one was stronger on the bottom and increased the effect of the ship to resist towards port;
4-    The wrong positioning of the forward tug: the tug, however, Voith, did an inefficient job during which the moment lever to pull the ship to port side was much less than the one was pulling the ship forward increasing her speed further. A voith-driven tug expected to go behind the beam and use braking and pulling abilities effectively to slow down the ship and at the same time pull the bow towards the port side on a 90-degrees basis. However, this was not the case. The tug gives minimum effect on the 90-degrees axis while used more power for her own propulsion and pull the ship ahead on the 0-degrees axis. Apparently, the tug was not well-prepared for such an emergency.

What were the wrongful actions?

1- Positioning of the forward tug: The forward tug could be attached to the ship on a short-tie basis, with another word, as is more popularly known, “American style” on the port bow. In this case, the tug could do pull and push job and also braking job more quickly and more efficiently, However, in such a connection, the maximum speed of the ship should not exceed 4-5 knots. 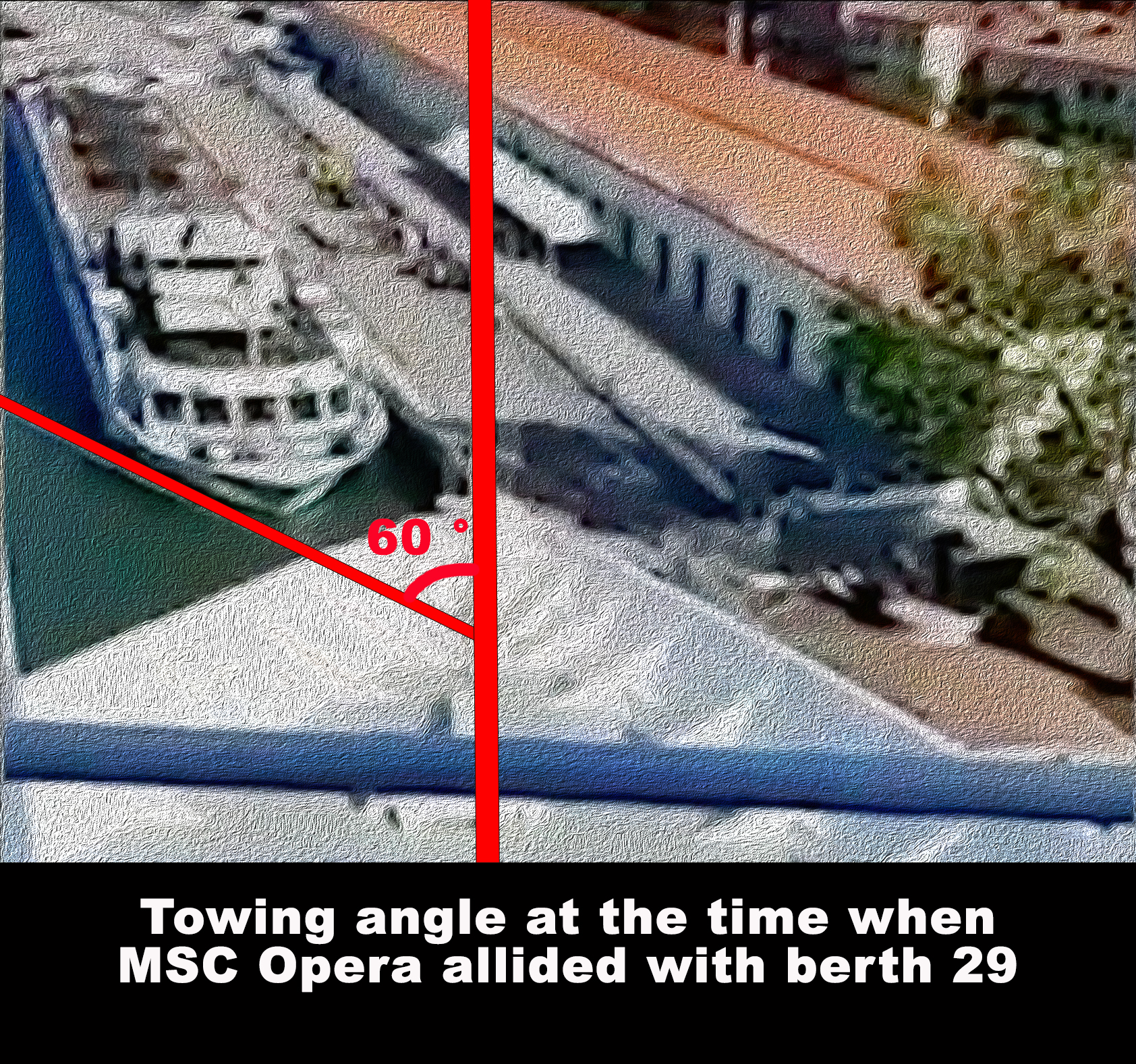 2- Not using the emergency stop: What I noticed in the accident videos was that ship’s propeller thrust was still on and giving headway to the vessel. It is understandable that the ship lost controls with the engine, but, in no case this loss of command may include the emergency stop buttons. The main engines should be immediately shut down byusing the emergency stop buttons to stop the thrust of the ship. In such a case the braking effect of the stern tug and the anchors would be more efficient. Furthermore, as the propeller thrust was on, the pivot point of the Opera went towards the bow of the ship, shortening the turning lever for the forward tug. That reduced the efficiency of the forward tug and increased the power of the donkey-like effect.

3- Positioning of the aft tug: As the turning lever of the forward tug shortened due to the location of pivot point moved towards the bow of the ship, the efficiency of the stern tug, with a long turning lever, increased. In such a case where the ship has a headway with the thrust, the stern tug needs to be used for steering of the ship due to the pivot point turning levers issue. And, in this case, I noticed that this was not done, Stern tug was not used to steer the ship. Instead, the stern tug was a little bit on the port quarter of the ship, increasing the ship’s tendency to turn towards starboard. And, “tutta a sinistra” command given from the commanding bridge most probably included the stern tug, which, in fact, would make the ship to turn towards starboard side due to the long turning lever.

4- Power of the aft tug: The aft tug was capable of exerting 40 tons of Bollard Pull, which is quite unsufficient compared the size of the vessel. At leas 65 Tons BP tug needed to be associated with the vessel for an efficient braking power, with an appropriate connecting point and wire. 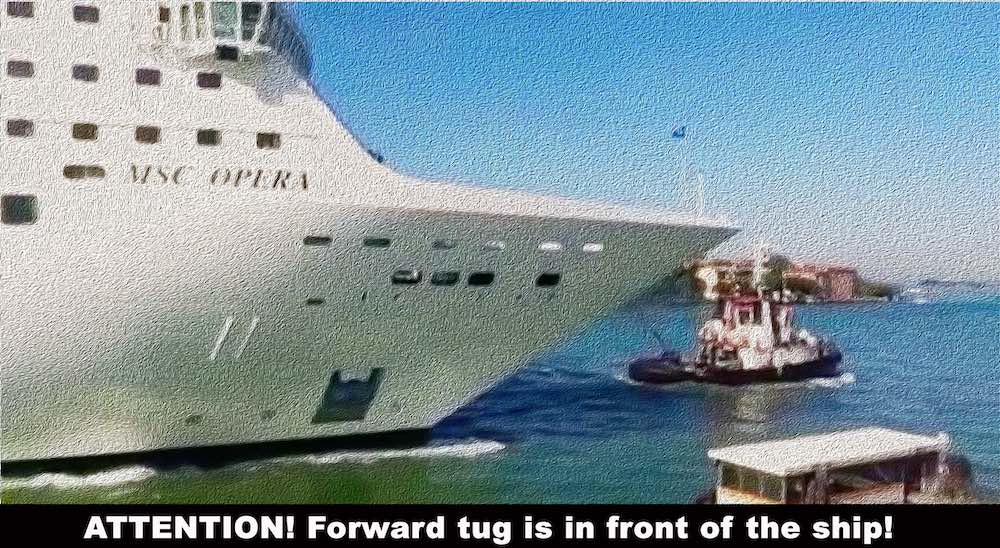 Was this an avoidable accident?

It is easy to speak after an accident. I witnessed many near-miss situations and a number of accidents during my piloting career.There is very little time you have. Therefore, even in normal proceeding, I always have alternatives in my mind. If that went wrong what I have in hand? The main rule is that: you always need to have something in your hand as an alternative that the current one you do. If there is no alternative, you stop and cancel. Because that is an emergency situation, no matter it looks normal for the time being.

Should large passenger ships be banned in Giudecca canal?

The reaction of local people is quite understandable, especially after such an accident. In fact, this was more a near miss than an accident, because, if the MSC Opera had crashed on the River Countess as first impact instead of the pier, there could be a much worse result. For that reason, we need to name this as a near miss rather than an accident. So, as I commented for this accident as avoidable, provided the conditions mentioned, I can presume that the safety of passing large cruiser vessels can be maintained. But some measures should apply. Here are my suggestions:

1-    Large passenger ship will be provided with the local pilot and escorted by two proper tugs 65 tons BP each, with voith or asd propulsion, asd recommended- until St- Andrea-St. Nicola passage. Tugs will connect with long-tie, forward and aft, centre-lead.
2-    At the approach to St. Andrea-St. Nicholas passage, two more tugs will join to escort. One will connect short-tie on the port bow. The speed of the system will not exceed 4 knots from that point on.
3-    The rest, 4 miles of distance will be taken under harbor maneuvering principles.
4-    Engines will be all-time ready for emergency stop.

Provided the above conditions, large passenger ships may pass safely through rthe Canal of San Marco and the Canal of Giudecca. The risk of an accident will almost be eliminated in that way.

For a long period of time, I worked on a passenger ferry between which was regularly lining between İzmir, Turkey and Venice, Italy. I know passing through beautiful canals is a special experience for all passengers. Therefore, banning the cruisers from passing through these canals will be to disadvantage of people, both onboard and ashore. Therefore, I would see no reason for large passenger ships for stop passing through Venice channels from the safety point of view if the necessary safety measures are taken.

The views in this article are my personal professional views and are in no way boundary for any person or institutions.

Other Writings by the Author