The Montreux Convention regulates the security and legal status of the Turkish Straits and the Black Sea and the non-stopover ship passages through the Turkish Straits. Montreux Convention Regarding the Regime of the Straits was undersigned by Romania, Bulgaria, Turkey, Greece, France, England and Japan as well as dissolved USSR and Yugoslavia, on July 20, 1936 and entered into force on 9 November 1936. The Convention was kept open to the participation of any state that signed the Lausanne Peace Treaty, and Italy, which took advantage of this right, joined the Convention on May 2, 1938. Japan, on the other hand, waived all rights and interests that could arise from her signatory State status to the Convention on September 8, 1951.

In the Convention, which consists of 29 articles, 4 Annexes and 1 Protocol, freedom of passage and navigation through the Straits is regulated, with the distinction made between merchant ships (articles 2-7), warships (articles 8-22) and aircrafts (article 23). Also, navigation and passage regulations were made by separately considering the conditions in peacetime, in time of war Turkey being belligerent and not being belligerent, And in which Turkey considers herself to be threatened with imminent danger of war2.

According to Article 4 of the Convention, in the time of war, Turkey not being belligerent, merchant vessels, under any flag or with any kind of cargo, shall enjoy freedom of passage and navigation in the Straits subject to the provisions of Articles 2 and 3, which regulates the peacetime.

In time of war, Turkey being belligerent, merchant vessels not belonging to a country at war with Turkey shall enjoy freedom of transit and navigation in the Straits on condition that they do not in any way assist the enemy. The condition “not to assist the enemy” as well as Turkey’s rights as a State arising from the “jus in bello” (Law of war) enables Turkey to check  the cargo carried by the passing vessels and therefore also gives the right to seizure and confiscation of contraband goods. Such vessels shall enter the Straits by day and their transit shall be affected by the route which shall in each case be indicated by the Turkish authorities (Article 5).

Should Turkey consider herself to be threatened with imminent danger of war, merchant vessels will be able to pass through the Straits in accordance with the peacetime order. But that vessels must enter the Straits by day and their transit must be affected by the route which shall, in each case be indicated by the Turkish authorities. Pilotage may, in this case, be made obligatory but no charge shall be levied. 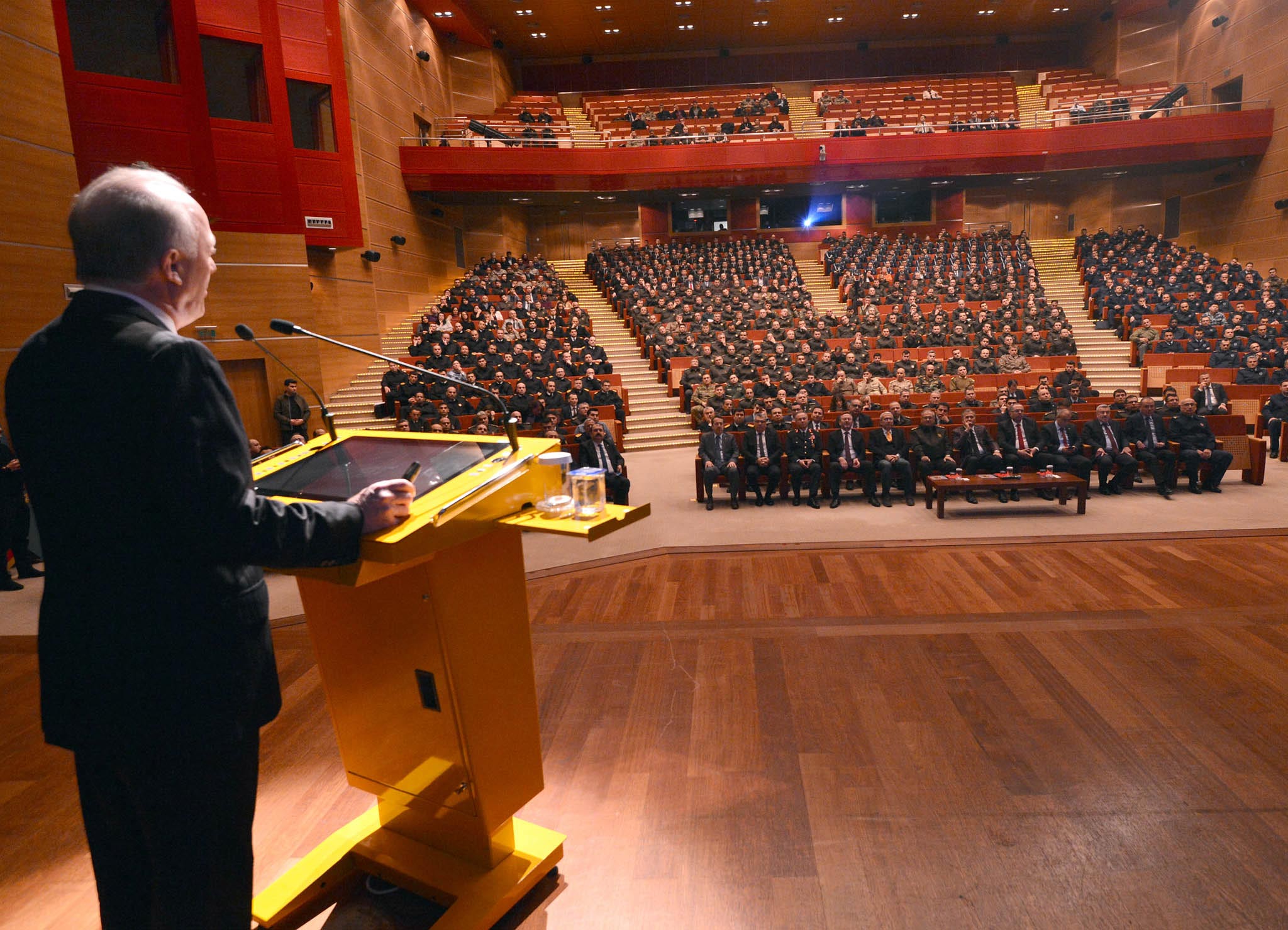 PHOTO: Ali Kurumahmut during the “Turkish Straits Conference” at the National Defense University.

In war, Turkey not being belligerent

The Montreux Straits Convention brings two exceptions to the rule that the Straits are closed to warships of belligerent States. Passage of warships belonging to belligerent States through the Straits which carry out the duties and obligations arising from the Covenant of the League of Nations (Article 25), and, in cases of assistance rendered to a State victim of aggression in virtue of a treaty of mutual assistance binding-Turkey (Article 19 Para 2).

In war, Turkey being belligerent

In the World War II, Turkey has declared war on Germany on February 23, 1945 and from that date until the end of the war, the rule of 20th Article had been applied through which wartime regime in which Turkey being belligerent was regulated. Turkey, during the war, by maintaining the Montreux Convention faithfully, kept the armed collisions away from this region and the belligerent States had to feel the value of having the control of the Straits until the end3.

Should Turkey consider herself to be threatened with imminent danger of war she shall have the right to apply the wartime order in which Turkey being belligerent (Article 21, Para. 1).

Vessels which have passed through the Straits before Turkey has made use of the powers conferred upon her by the Convention, and which thus find themselves separated from their bases, shall be permitted to return thereto. It is, however, understood that Turkey may deny this right to vessels of war belonging to the State whose attitude has caused Turkey being threatened by the imminent danger of war (Article 21 Para. 2). In other words, Turkey, may not permit to re-enter to the Straits 4 the warships of States due to which she found herself in the imminent danger of war with their statements or actions. In this case it is left to the discretion Turkey.

In the imminent danger of war, should the Turkish Government make use of the powers conferred by the Convention, a notification to that effect shall be addressed to the High Contracting Parties and to the Secretary-General of the League of Nations. If the Council of the League of Nations decide by a majority of two-thirds that the measures thus taken by Turkey are not justified, and if such should also be the opinions of the majority of the High Contracting Parties signatories to the present Convention, the Turkish Government undertakes to discontinue the measures (Article 21 Paras. 3, 4).

However, the UN took over the assets, archives, buildings and non-political technical functions of the League of Nations with the arrangements made between the two organizations.

arrangements, in this context, the relevant provisions of Article 21 of the Montreux Straits Convention, are not automatically taken over by the UN, but upon request, after the General Assembly or the relevant body has taken such a decision. It is generally accepted that it can be undertaken.

To summarize briefly, we can say that paragraphs 3 and 4 of Article 21 of the Montreux Straits Convention do not have a practical application area today. However, this does not mean that Turkey have unlimited discretion in this regard. The manner in which discretion is exercised may be discussed by other Contracting States in accordance with normal international procedures.

1 This study was written in reference to the following boks of Author Mr. Ali Kurumahmut: “Montreux Convention, of Turkish Straits and the Black Sea (TUDAV Publication No. 26)” and “Law of the Sea and Turkey’s nearby Sea Basin Conference Notes (Ministry of Transport and Infrastructure, November 7, 2017 ) ”.

2 The implementation of the regime stipulated by the Convention for peacetime continued until September 1, 1939, when the World War II began. From the beginning of the war to 23 February 1945, the date in which Turkey declared war against Germany, the rules of Article 4 and 19 had been applied which was about the wartime regime in which Turkey not being belligerent. Because of the Warships of belligerent States were not allowed to pass through the Straits, Turkey, on July 13th, 1941, did not permit to pass to Black Sea the 3 destroyers that Bulgaria bought from Italy. (Cumhuriyet Newspaper, 21 September 1944). From the 23 February 1945 till the end of the war, the rules of Articles 5 and 20 which regulated the regime in which Turkey was belligerent were applied, after that, the peacetime regime was re-adopted.

CAHIT ISTIKBAL
Has the West "sold" Ukraine?
ALİ KURUMAHMUT
TIME OF WAR AND IMMINENT DANGER OF WAR IN MONTREUX CONVENTION(1)