THE Port of Antwerp's cargo throughput in 2017 rose by 4 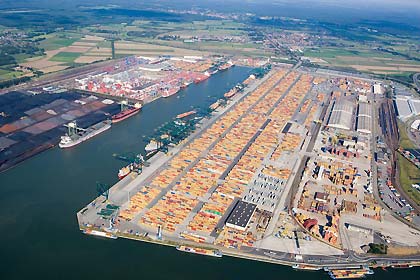 THE Port of Antwerp's cargo throughput in 2017 rose by 4.4 per cent compared to the previous year, to reach 223.6 million tons. The result marked the port's fifth consecutive year of record cargo volumes.

Volumes rose across the majority of sectors. Container tonnage grew 4.3 per cent year on year to 123 million tonnes, and container volumes were up 4.1 per cent to 10.5 million TEU. In the fourth quarter of 2017, container throughput rose by seven per cent in TEU terms.

Roll-on/roll-off cargo volumes were up 10.5 per cent to 5.1 million tonnes in 2017, while the number of cars handled increased by four per cent over 2016 to 1.2 million units, American Shipper reported.

Liquid bulk volumes, such as oil derivatives, rose by 5.7 per cent from 2016, while conventional breakbulk, such as steel, increased 4.8 per cent to 10.3 million tonnes.

However, dry bulk volumes, such as coal and ores, experienced a decline of 3.7 per cent to 12.2 million tonnes.

Commenting on the results, Antwerp Port Authority CEO Jacques Vandermeiren said: 'The favourable economic climate in combination with the big alliances that continue to opt resolutely for Antwerp means that container handling in Antwerp currently has the wind behind it.'

He added: 'In the coming years too we expect further growth in the container volume, and so in 2018 we will continue to work hard on providing additional container handling capacity in Antwerp.'

Hapag-Lloyd sees mergers ahead, and shipping growth rising 4pc in 2018