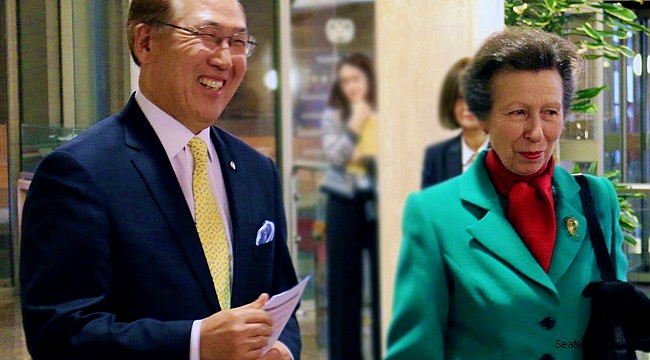 The Princess Royal was received by IMO Secretary-General Kitack Lim and addressed the 100th session of the Maritime Safety Committee (MSC) and took a keen interest in the proceedings, as the Committee discussed measures to enhance maritime security and piracy and armed robbery against ships.

The Princess Royal, who is Master of Trinity House and President of the Mission to Seafarers, then met delegates from a number of Member States and non-governmental organizations. Photos here.

The visit was organised as part of a series of events commemorating IMO’s 70th anniversary and the World Maritime Day theme - “IMO 70: Our Heritage: Better Shipping for a Better Future".

In March 1948, the convention establishing IMO was adopted. The Maritime Safety Committee was one of the IMO bodies established by that convention and is the oldest technical committee of IMO.

On 6 March this year, 70 years to the day since the IMO was established, Her Majesty the Queen visited IMO Headquarters.

The Egyptian court did not allow Ever Given to leave!
Related News
Most Read News
Recent Comments
EU NAVFOR PROMOTES MARITIME SECURITY DIALOGUE IN SOMALIA