Zim splits FE-India-Med-N Europe into 2 with slots with MSC, Maersk 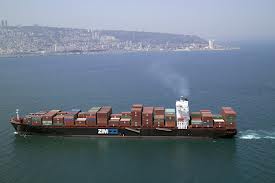 Zim splits FE-India-Med-N Europe into 2 with slots with MSC, Maersk

The AME will cease port of calls at the North Europe ports of Felixstowe, Antwerp and Hamburg, plus the stop at Limassol in Cyprus.

The service will in future turn around at newly added port Mersin in Turkey to offer direct connections to ports in the Far East, as well as Israel, Mersin, Israel string owing a double call at Haifa.

Zim is offering the two separate loops on the AME through an existing partnership with MSC involving the Israel Express loop. In addition, Zim will take slots on Maersk Line's EuroMed service, which Zim will brand NE2, reports Alphaliner.

The existing North Europe-Eastern Mediterranean service, Israel Express, has been provided through a slot purchase arrangement on the MSC service. Its port coverage will be expanded to include port calls previously made by the AME service. It said Zim will bring a 5,500-TEU chartered vessel to this five-ship service.

The port rotation for the NE2 is: Felixstowe, Rotterdam, Bremerhaven, Antwerp, Marsaxlokk, Haifa, Limassol, Alexandria, Ashdod, Salerno and back to Felixstowe.

Following the removal of the North Europe calls on the AME service, Zim will offer two direct Asia-North Europe connections through slots on CSCL's AEX1 service and as a vessel operator on the CES2/AEX2 service jointly operated with CSCL and Evergreen.

"However, it will not have any significant impact on overall slot capacity on the FE-North Europe route as the AME was operated mainly as a multi-trade service combining a Far East-India-Med link with a Med-North Europe loop," the report added.