Wrecked Rena took shortcuts to get into Tauranga on time: official probe

THE 3,036-TEU Rena, now a wreck aground on the Astrolabe reef off New Zealand's Port of Tauranga had been taking a shortcut to make the harbour on time, an investigation shows. 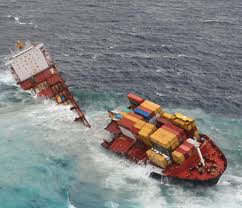 THE 3,036-TEU Rena, now a wreck aground on the Astrolabe reef off New Zealand's Port of Tauranga had been taking a shortcut to make the harbour on time, an investigation shows.

New Zealand Transport Accident Investigation Commission (TAIC) released an interim report and said the vessel was equipped with a navigation system with the use of its autopilot, GPS positions and charts, which was sailing "on a direct track for Astrolabe Reef" at 1:50am October 5.

The report said the captain and navigating officer had not followed the designated route several times so as to reach the port before the 3am deadline. It found the Rena's actual course was about two degrees south of the heading on the vessel's gyrocompass.

"At about 0205 (2:05am) the master noticed an intermittent echo on the radar. The echo was about 2.6 nautical miles (4.8 kilometres) dead ahead of the Rena. The master showed the echo on the radar to the watch-keeping able-bodied seaman and they used binoculars to look through the windows of the bridge for the cause of the echo. They could not see anything, so they moved to the bridge wing to look from there. When again nothing could be seen, the master said he decided to plot the Rena's position on the chart, so began to walk through the wheelhouse to the chartroom," the report said.

The interim report concludes by saying that the TAIC "is continuing to collate and verify information directly related to the grounding and is also pursuing several lines of inquiry of a wider systemic nature".

The interim report does not contain analysis of why events happened as they did or say what could change to help prevent a recurrence. These matters will be covered in the TAIC's final inquiry report, said a agency's statement.

Last month, both the Filipino captain and navigating officer admitted 10 of the 11 charges relating to mishandling the vessel and altering ship documents after the incident. Sentencing of both men is set on May 25.