THE Suez Canal Authority (SCA) said it is ready to compete with Panama for Asia-US east coast trade and will offer promotions and discounts to get it, reports IHS Maritime News. 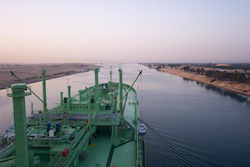 THE Suez Canal Authority (SCA) said it is ready to compete with Panama for Asia-US east coast trade and will offer promotions and discounts to get it, reports IHS Maritime News.

Already, two out of three Asia-east coast services operated by Maersk use the Suez Canal, said Maersk officials at the grand opening.

"There is certainly some competition and we feel we are well placed for the US east coast cargo. Our tolls are cheaper and - even after the Panama Canal expansion is complete - we can still handle larger vessels," said SCA planning director Mahmod Rezk.

The more than US$8 billion project, which was unveiled with much ceremony, allows two-way traffic on the canal and provides increased capacity for larger vessels.

Before expansion, only eight vessels of 45-foot draft could be accommodated at anchor in the Great Bitter Lakes while convoys of ships headed in the other direction.

Before, Suez could handle vessels of up 19,000 TEU. It's unclear how much larger vessels it can now handle. The Panama Canal can only transit 5,000 TEUers, but will handle 13,000-TEU ships next year.

Maersk, the world's biggest container carrier, has been pressing the Egyptian government to start work on a side canal to allow for better access to the Mediterranean from the Suez Canal Container Terminal, in which it has a 55 per cent stake. The construction of a side canal is expected to begin soon.

"However, this is because via Panama, other east coast ports are called at before New York is reached, whereas via Suez, New York is the first port of call after Asia," he said.

Shanghai is 10,600 nautical miles from New York via the Panama Canal and 12,400 via the Suez Canal. According to Drewry's, transit time based on current schedules is 30 days via Suez and 36 via Panama.

There are 16 weekly Asia-east coast services via Panama carrying 73,000 TEU, according to Alphaliner. Services via the Suez Canal account for 70,000 TEU.

There are currently 25 weekly strings covering Asia-US east coast and the Panama Canal had 51 per cent of total capacity, up from 44 per cent in February, Alphaliner noted in a July report.

"For us the scale benefit of the Suez makes it more attractive," said Maersk chief operating officer Soren Toft,

"However, a third of our Asia-east coast services are via Panama and we will continue to evaluate which route to choose going forward."

The average slow cost of a TEU moving from Hong Kong to New York on a 4,800 TEU ship via the Suez is US$1,285.50, which is $35 more than an identical trip via the Panama Canal, according to Chaim Shacham of CCS Maritime Services.