Home MARKETS Whither oil prices and tanker shipping in 2011?

Whither oil prices and tanker shipping in 2011?

At the start of a new year the thoughts of oil producers and marketers worldwide turn to what price their loaded barrels might fetch over. 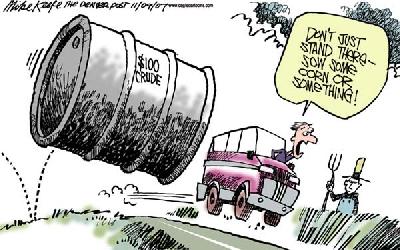 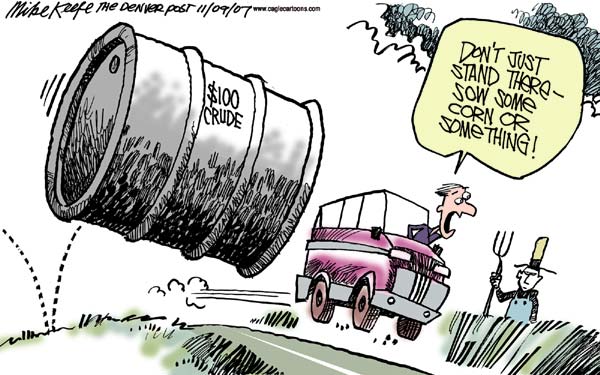 At the start of a new year the thoughts of oil producers and marketers worldwide turn to what price their loaded barrels might fetch over the coming 12 months while consumers are primarily concerned with how much they’ll have to pay for their litre or gallon of fuel at the petrol pump. Today, with the price of oil inching up through the USD 90 per barrel range towards the psychological barrier of USD 100, uncertainties about price movements appear about as great as they were exactly three years ago. In early January 2008 the price of a barrel of oil breached the USD 100 mark for the first time and didn’t stop. By July 2008 it had reached USD 147, a new record, and proffered itself as a harbinger of the impending global financial meltdown which struck a few months later.

Most energy analysts are reassuringly pointing out that the events of 2008 will not be repeated in 2011, highlighting several reasons why. First of all, the global economy is not currently overheating like it was three years ago. Also, oil consumption in the industrialised nations is declining while the members of the Organisation of Oil Exporting Countries (OPEC) have a total of over 5 million barrels per day (bpd) of excess production capacity of their sleeves at the moment, much more than was the case in 2008. If oil does push past the USD 100 per barrel barrier, say the pundits, it will not do so by much and the rise will not be sustained.

Supporters of the bearish view on oil prices report that US and European consumption will continue to decline as a result of the introduction of both more fuel-efficient cars and a new generation of hybrid vehicles as well as the availability of plentiful supplies of natural gas as an alternative fuel. Furthermore, the current relatively high price of oil is spurring increased drilling activity with the result that new sources of oil in places like offshore Ghana and Brazil are being brought on stream.

In reply, the market bulls state that it is not so simple. In their view the resurgent demand for oil worldwide in tandem with cold weather reduced inventories and a reluctance on the part of OPEC to open the taps much further will maintain the upward pressure on oil prices. Additional pressure will be exerted due to the rising costs of oil production in remote offshore locations and uncertainties over offshore drilling in the wake of the Deepwater Horizon disaster in the US Gulf last Spring.

Demand for oil surged by 2.3 million bpd, to reach an average of 87.4 million bpd, in 2010, making up for a large part of 2009’s mammoth slump in oil consumption. Oil use in 2011 is forecast to swell to nearly 88.6 million bpd as the world economy continues on the path to recovery.
Feeding this growing requirement for oil will require continued investment in equipment capable of developing more remote and more marginal oil reserves, now that the larger, more accessible oil fields have been exploited. The spend on new wells, production platforms and other energy infrastructure is likely to approach USD 500 billion in 2011 and a substantial percentage of the total reflects the higher costs associated with finding and extracting oil in harder-to-access areas.

The oil exploration and production sector’s equipment requirement is benefiting from investments made three years ago when the price of oil reached an apex. Shipyards delivered 25 specialist deepwater rigs in 2010 and another 35 such units are due to be handed over in 2011.
While an earlier moratorium and current uncertainties as a result of Deepwater Horizon have effectively brought deepwater drilling in the US Gulf to a standstill, such activity is continuing largely unabated in many other parts of the world. Petrobras of Brazil, for example, is budgeting upwards of USD 30 billion for offshore oil development projects in 2011, the largest such commitment by an oil producer this year. The lion's share of the investment is committed to exploiting the rich resources of the recently discovered deepwater oil fields southeast of Rio de Janeiro.

Other plus signs for the oil supply/demand balance are improving oil field recovery technologies, increasing natural gas output and a potential rebound in Iraqi oil production. A good example of how advancing oil recovery techniques are helping to prolong the life of ageing oil fields can be found in the US. The inexorable slide in that country’s domestic production, which began back in the 1970s, appears to have been arrested through the use of techniques such as hydraulic fracturing and horizontal drilling to rejuvenate geriatric oil wells.

Gas field developments have proceeded apace in recent years and the processing of the contents of these fields is producing rising volumes of not only dry natural gas but also associated liquids. Output of these light natural gas liquids (NGLs), which make good gasoline blending stock amongst other useful products, could climb by 700,000 barrels a day worldwide in 2011. OPEC members are able to increase the output of these liquids freely since they do not count as part of their production quotas.

Despite questions surrounding the strength of the market recoveries in several key trading areas, Asian economies are forecast to grow strongly again this year. Robust economic performances by China and India are expected to bolster world trade and push crude oil prices upwards by more than 10% this year, to the extent that the average world price for 2011 will be around the USD 100 per barrel level. Pragmatists point out that this is not such a frightening prospect because dollar-denominated oil is cheaper than it seems due to the decline in the value of the dollar in recent years.
In any case at the end of the day predicting the price of oil for the next 12 months requires the kind of omniscience possessed by few, if any, analysts. It involves accurately predicting global growth and output in dozens of countries, not to mention changes in technology, tax and regulatory policy as well as fickle market sentiment and geopolitics.

Motorists will have to content themselves with the fact that there are currently few signs of the bottlenecks that pushed oil prices through the roof in the summer of 2008. However, although oil supplies are readily available, demand is high and fuel will not be cheap in 2011. Oil producers and marketers will post attractive turnovers, drillers will be active in particularly challenging environments and the world tanker fleet will be busier than ever before.