UZMAR worked with Robert Allan Ltd, which has extensive experience in the design of powerful and manoeuvrable river tugs. In order to meet demands for manoeuvrability maximized fuel economy and to comply with the crash stop requirement, extensive CFD analysis was performed by Robert Allan Ltd. As a result, the hull shape, tunnel geometry and propulsive components have been optimized for those specific requirements. 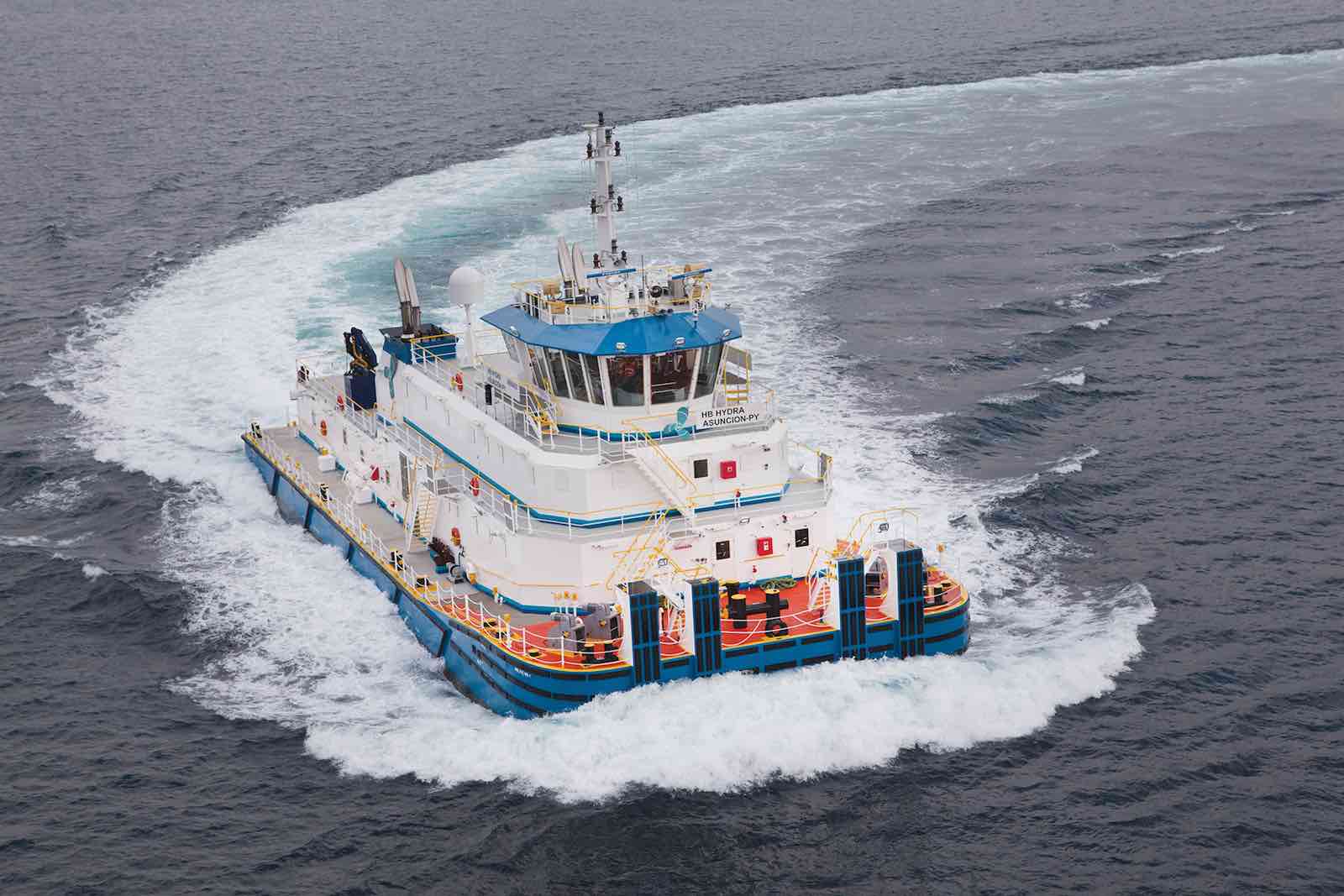 Robert Allan Ltd designed and Vienna Model Basin optimised total eight push boats package is specifically customised for Hidrovias do Brasil S.A., which is a river iron ore transport subcontractor company for Vale. The unbeatable combination of power and manoeuvrability applied UZMAR SDP 4600 Pushboat in the 69 ton bollard pull range is more sophisticated than its predecessors. The RAL endurable design was not simply a regular pushboat where the high technology brings the future forward. Increased fuel efficiency and safety innovative SDP 4600 is pushing the boundaries.

The vessels will be used for inland waterways logistics from Colombia in Brazil to Argentina and/or Uruguay through the Paraguay-Parana waterway.  The total distance is over 2500km, much of it navigating through extremely curvy river sections which make excellent manoeuvrability a necessity. An additional crash stop requirement of 2.5 flotilla length proved to be a guiding factor. In order to meet the required throughput, eight push-boats will be constructed. The flotillas will consist of one push-boat pushing 16 barges, with a total capacity of 40000 dwt. The operation will be a 24 hoursper day, 11 months per year operation with minimum downtime.

UZMAR worked with Robert Allan Ltd, which has extensive experience in the design of powerful and manoeuvrable river tugs. In order to meet demands for manoeuvrability maximized fuel economy and to comply with the crash stop requirement, extensive CFD analysis was performed by Robert Allan Ltd. As a result, the hull shape, tunnel geometry and propulsive components have been optimized for those specific requirements. This was then verified by a series of model tests conducted at the Vienna Model Basin in Austria.

The result of the deep researches created the new generation pushboat which is a 45.6m LOA, 16.5m beam, 2.1m draft at the dry season and 2.4m draft at the wet season 7200bHP diesel-electric HFO powered push-boat with azimuth drives and propellers in nozzles configured for shallow water operation.  The DE system is an AC variable rpm controlled designed and integrated by approved ABB system integrator Elkon / Imtech with complete ABB components. During the sea trials, max bollard pull of 69 tons and speed of 13.2 kts are performed.  Besides, due to UZMAR's sophisticated engineering and construction applications the estimated vessel lightweight is achieved at 97% accuracy.

Marcelo Ruiz Diaz ,Hidrovias do Breasil’s shipyard representative, commented in the Christening Ceremony; ‘’On behalf of Hidrovias do Brasil, I will like to thank and congratulate UZMAR, Edward’s Marine, each subcontractor and person who made possible the manufacture of the Phoenix and Lynx

Behind these two boats, there is a lot of invested time and sacrifice, among other resources.

Having the Phoenix and Lynix sailing in South America is a huge achievement for Hidrovias do Brasil, UZMAR and for all of us. This is not the end of the project but a big step on that direction.

Thank you and congratulation one more time, and remember that Hidrovias do Brasil success in South America is a success for UZMAR and for all of us.

We are really having a good time here.’’

We would like to share some highlights of the new born magic;
Improved sea keeping, towing capabilities and a new hull form for shallow sailing draft is promising the future tech today. To improve the sea keeping and towing capabilities in shallow draft conditions, UZMAR and RA conducted extensive R&D, as well as Vienna Model Basin in Austria. The Pushboat has a completely revised hull form with a perfected dimensions and lightened hull and accommodation.

The diesel electric system is designed and manufactured by Turkey's leading ship electrical engineering and manufacturing company ELKON with ABB power electronics and supervision, which is a member of IMTECHGroup. These high-performance push boats are propelled by a state of the art diesel-electric propulsion system, with three main diesel generator sets providing 3 x 1,710 ekW of power to 3 x 1,600 kW motors, each driving a Schottel SRP 1215 Z-drive with nozzle modifiedfor shallow draft operation. The major electric components (AFE drives, propulsion motors,  generators, etc.) are ABB components, supplied by Elkon, while the generator engines are three Wärtsilä 9L20, medium speed, each producing 1,800 bkW at 1,000 rpm. Shortly, the system works as follows: when a low level sailing speed/power required on board, the first engine starts at full load where the Verified Frequency Drivers separates the power to the propellers evenly.Nevertheless, if the power requirement reaches up to 40%, the second engine starts to feed up the propellers, the third engine follows this routine when the power requirement reaches to 70%. This modification allows high fuel efficiency and longer life circle for the main engines and low CO2, NOx, SOx and PM emissions.

UZMAR reached the Crash Stop Requirement with adopting the Frequency Mode Effect Analyses, all possible emergency scenarios are analysed and installed to the system and examined onboard.

These push boats will run on HFO, with the ability to operate on MDO, if needed. Each push boat has a total fuel capacity of 500 m³ of HFO and 30 m³ of MDO, and a ballast capacity of 400 m³. The potable water capacity of 34 m³ is supplemented by two onboard flash evaporator units.

The vessel is outfitted for a maximum complement of 18 persons, with 6 single and and 6 double cabins spread over two deckhouse levels. Above a large wheelhouse with unobstructed 360° view allows operators excellent visibility of the barge convoy ahead as well as supervising bargeconnection work taking place on the raised forecastle deck.

This accommodation layout has improved crew comfort and she is built to comply with the very latest IMO and MLC 2006 crew and comfort regulations. Noise and vibration levels are kept to a minimum due to flexibly mounted main engines and flexible drive couplings. The accommodation and wheelhouse have a floating floor to keep noise levels within lowest dB and vibration levels to a minimum. Everything has been considered from an ergonomic point of view. If the vessel is operated for 7/24 stretch, it has to be comfortable for the crew and this also makes it safer of course. At the same time,the wheelhouse design gives all round visibility and has a user friendly layout.

UZMAR SDP 4600 Pushbaot shows the world where the Naval Architecture, Marine Engineering and Shipbuilding reached today where UZMAR tailored the technology to satisfy the requirements of the ship operators.

Fuel: HFO, with the ability to operate on MDO