On the 24th May 2012 the USA Congressional staff delegation arrived with a visit to the premises of Klaipėda State Seaport Authority. Delegation stayed in Lithuania from the May 21st to May 25th. 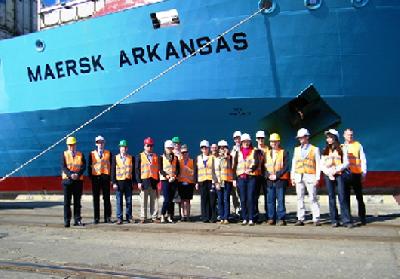 On the 24th May 2012 the USA Congressional staff delegation arrived with a visit to the premises of Klaipėda State Seaport Authority. Delegation stayed in Lithuania from the May 21st to May 25th.

This visit was organized under the auspices of the Embassy of Lithuania to the United States of America. The goal of the Embassy while initiating this visit was to present to the members of Congressional staff delegation the objectives of the foreign policy of Lithuania, to promote inter-parliamentary relations of the USA and Lithuania, to create the possibility for members of the delegation to enter into contacts with representative offices of Congress members, to popularize the name of Lithuania in Washington. The delegation encompassed concerned with foreign policy, transport, energy security and trade issues assistants to the members of the US Congress representing the Democratic and Republican parties.

The Congressional staff delegation paid a visit to the USA Embassy in Vilnius and to the Ministry of Foreign Affairs, the staff had a meeting at the Seimas, at Presidential Palace and at diverse educational institutions; during visit to Kaunas the delegation members were received by the Mayor of Kaunas municipality.

While visiting Klaipėda the delegation members were received on board of the ship flying the flag of the USA “„Maersk Arkansas”, later the staff delegation visited the premises of Klaipeda Oil Terminal “Klaipėdos Nafta” where met with the director general Rokas Masiulis and discussed the development of the Lithuanian LNG terminal and during the meeting with the director general of SE Klaipeda State Seaport Authority Eugenijus Gentvilas issues related with the potential of East – West corridor and possible future cooperation in this sphere were on discussion. Later the delegation had an educational fact – finding boat trip within the territory waters of the Port where the Port infrastructure, suprastructure, the Port development projects and perspectives were presented.

The Congressional staff delegation visited Nida where they had a meeting with the Mayor of Neringa municipality.