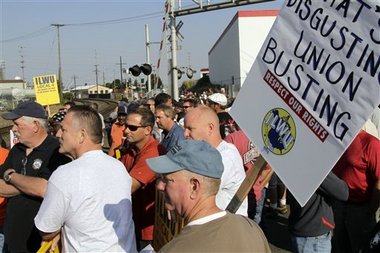 AS West Coast longshoremen still negotiating a new contract, retailers are bringing holiday merchandise into the country at record levels to protect against potential supply chain disruptions, according to the monthly Global Port Tracker report released today by the National Retail Federation and Hackett Associates.

Import volume at major US container ports is expected to total 1.5 million containers this month. That's the highest monthly volume in at least five years and follows a trend of unusually high import levels that began this spring as retailers worked to import merchandise ahead of any potential problems.

"We're still hoping to get through this without any significant disruptions but retailers aren't taking any chances," NRF Vice President for Supply Chain and Customs Policy Jonathan Gold said. "Retailers have been bringing merchandise in early for months now and will do what it takes to make sure shelves are stocked for their customers regardless of what happens during the negotiations."

The contract between the Pacific Maritime Association and the International Longshore and Warehouse Union expired on July 1. Dockworkers remain on the job as both sides continue to negotiate a new agreement, and NRF has urged both labor and management to avoid any disruptions that could affect the flow of back-to-school or holiday merchandise.

Retailers have a number of contingency plans in place, and Global Port Tracker numbers show that some importers have begun shifting cargo to East Coast ports: West Coast ports handled 59 per cent of U.S. retail container cargo in May, down from 62 per cent in January.

US ports followed by Global Port Tracker handled 1.48 million Twenty-Foot Equivalent Units in May, the latest month for which after-the-fact numbers are available. That was up 3.7 per cent from April and 6.6 per cent from May 2013. One TEU is one 20-foot cargo container or its equivalent.

The import numbers come as NRF is forecasting 4.1 per cent sales growth in 2014. Cargo volume does not correlate directly with sales but is a barometer of retailers' expectations.

"The economy is on the upswing," Hackett said. "There's been a sharp drop in unemployment, consumer spending has seen solid growth over the last three months, and there's a strong level of consumer confidence."