US uncertain of response to Chinese high seas claims

CHINESE Spratly Island dredging, that has created 2,000 acres of new land on coral atolls in the South China Sea, has left the US struggling to come up with a response, reports London's Financial Times. 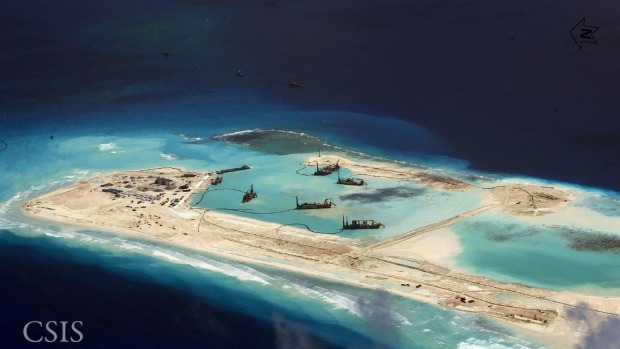 CHINESE Spratly Island dredging, that has created 2,000 acres of new land on coral atolls in the South China Sea, has left the US struggling to come up with a response, reports London's Financial Times.

Last week, US Defence Secretary Ashton Carter visited Hanoi and pledged to provide US patrol craft to the Vietnamese navy but found Vietnam and others fearful of China and reluctant for form a firm common front.

Last week the USS Essex, an amphibious assault ship that looks like an aircraft carrier, anchored in Hong Kong harbour. The ship routinely has a Marine Expeditionary Unit of 2,200 combat troops, with Osprey vertical takeoff turbo-prop air transporters, capable of carrying troops yet armed with missiles and heavy machine guns according to Wikipedia.

The Obama administration appears to be unsure about how strongly it should push back against what US officials see as a long-term Chinese plan to control the region's waters, which are directly in the path of the main commercial sea route from Asia to Europe and Africa.

China claims 90 per cent of the waters of the South China Sea, a position contested by neighbours including Vietnam, Malaysia and the Philippines, said the report.

China is building a military base including a three-kilometre runway capable of handling fighter jets. US analysts fear the next step is for China to claim airspace over the South China Sea by declaring an air defence identification zone once the runway is finished.

"The fear is that China will turn the Sea into a Chinese lake," says Rajeev Ranjan Chaturvedy of the Institute of South Asian Studies in Singapore.

Faced with such a prospect and indecision among its friends, US officials admit they need to do more to challenge Chinese muscle-flexing, but there is no consensus yet within the Obama administration about how to respond.