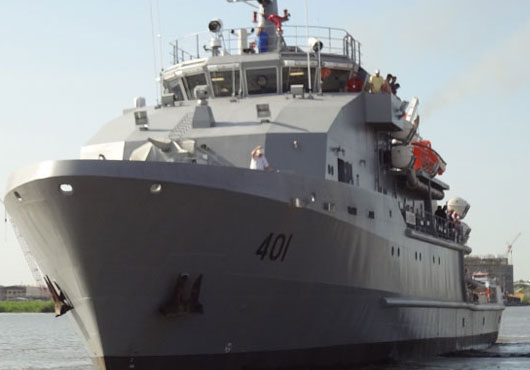 The Iraqi navy and the U.S. Navy’s Naval Sea Systems Command marked the delivery of two 60-meter Offshore Support Vessels (OSV 1/ OSV 2) to the Iraqi navy in a ceremony at the Umm Qasr naval facility, Dec. 20. RiverHawk Fast Sea Frames is the prime contractor for the OSV procurement, with Gulf Island Marine Fabricators manufacturing the hull and deckhouse, and outfitting the vessels.

OSVs are multi-function vessels providing a wide range of capabilities to support Iraq’s oil production platforms. The vessels will provide transport support for crew changes and resupply to the platforms. Each OSV is equipped with a 30mm gun weapon system and outfitted with fast attack boats to defend it and the offshore platforms. The vessels each include a vertical replenishment deck to facilitate the transfer of supplies as needed.

The multi-function 60-meter OSV is expected to play a central role in Iraq’s Navy, providing a wide range of capabilities to support oil production platforms and acting as a ‘mother-ship’ for patrol boats. Along with command/control functions associated with security of the platforms and other afloat forces, the OSV will provide transport support for oil platform crew changes and resupply, and support patrol boat crews with provisions, repairs and refueling. The OSV is equipped with guns and outfitted with fast attack boats. The vessel has a vertical replenishment deck to facilitate the transfer of men and supplies as needed. 2 Caterpillar 3516C engines rated 3150 BHP @ 1800 rpm provide main propulsion.

PEO Ships is currently managing the design and construction of all U.S. Navy destroyers, amphibious ships, special mission and support ships, as well as a wide range of boats and craft for U.S. agencies and foreign military sales.