A supply ship in the the Marshall Islands with twenty aboard sank early Saturday. The 90-foot Jeljelet Ae was about eight hours into its trip to Likiep Atoll, reported the AFP. 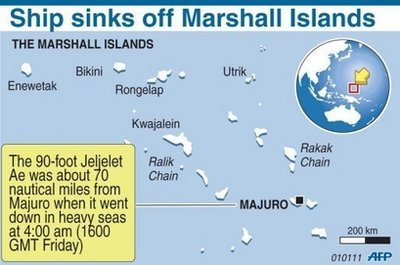 MAJURO, Marshall Islands (AFP) – All 20 people on board a supply ship that sank off the Marshall Islands early Saturday were rescued after spending more than 12 hours drifting in heavy seas, officials said.

The crew and passengers were found in a life raft in the late afternoon as light was fading.

"They have all been rescued," the US embassy deputy chief of mission Eric Watnik said.

An emergency locator beacon from the Jeljelet Ae directed Marshall Islands and United States Coast Guard search and rescue teams to the area.

The vessel, laden with heavy equipment and construction materials for a school being built on Likiep Atoll, went down quickly after the crew radioed they were in trouble about eight hours into the 173-nautical-mile, open-ocean journey.

Details of the rescue were sketchy but Alson Kelen, the chairman of the Marshall Islands Shipping Corporation which operates the vessel, said it was equipped with life rafts and lifejackets.

Kelen was on board a fishing boat which, with the aid of aircraft circling overhead, was the first to reach the life raft carrying the 20 men.

They were later transferred to a larger Marshall Islands search and rescue craft for transport back to Majuro.

The Jeljelet Ae was one of four vessels that service the remote Marshalls, scattered across 500,000 square miles (1.3 million square kilometres) of ocean in the western Pacific, about 2,000 nautical miles southwest of Hawaii.

The cause of the sinking was not immediately known, but Marshall Islands Shipping Corporation officials have warned the four vessels were overdue for maintenance.

However, attempts made in the past two years for the government to allocate funds for the vessels to be overhauled have been unsuccessful.