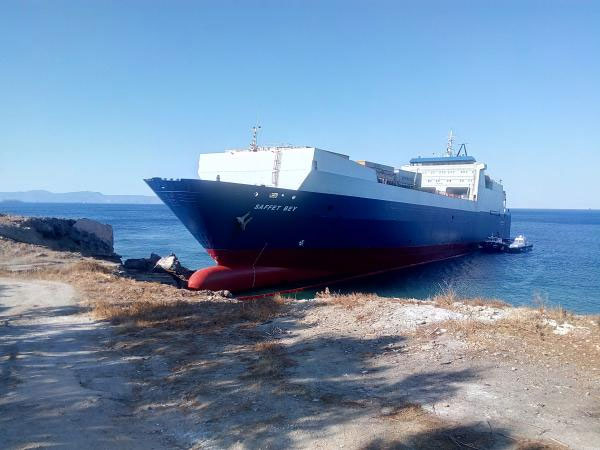 According to reports, the vessel was sailing in a full speed when got stuck on the rocks near the populated area.

It was around midnight when the 1987-built elderly ro-ro ship went aground near Cape Maleas, in Mora Peninsula.

Witnesses said they were awakened by a loud noise. There were 22 crew members and four passengers on board of the vessel at the time of the incident. No reports for damages or injured people.

The ship said to be detained. The Istanbul-based owner of the ship, Ulusoy Sea Lines said that the ship went aground due to a rudder failure.

However, a maritime expert speaking to Turkish maritime news agency Kaptan Haber (www.kaptanhaber.com) said that the reason behind the accident could be due to a human error.

The expert said that the if the rudder failure was the case and human element aware of it the ship could easily stop her engines before gouing hard aground.

According to shipping data, the cargo ship was en route from Trieste (Italy) to Cesme (Turkey).