Ten people were killed and 19 injured after a carbon dioxide leak on a cargo ship that was being repaired at a dock in eastern China. 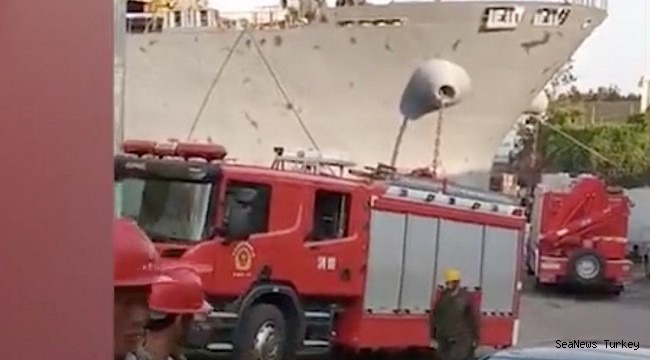 Ten people were killed and 19 injured after a carbon dioxide leak on a cargo ship that was being repaired at a dock in eastern China.

The incident happened around 4pm on Saturday at the Longyan port in Weihai, a coastal city in Shandong province.

Ten people were found dead at the scene, according to a notice released by the Weihai local government on Sunday morning. Another 19 were sent to a local hospital and are in stable condition.

The identities of the dead and injured have not been released.

“There was a carbon dioxide leak in the fire extinguishing system on the ship,” the notice said, adding that the third officer of the ship was suspected of being responsible.

“The police have already detained the relevant person and are still investigating the incident. We will hold the responsible party accountable according to the law,” the notice added.

An emergency team has been set up by the local government to investigate.

The ship, named Jin Hai Xiang, has a capacity of just over 69,000 tonnes and is owned by the Fujian Shipping Company, a deep sea freight transport company.

The ship, built in Japan in 1994, docked for repairs earlier this year and, according to a note from the Fujian communication transport group, replacing the fire extinguishing CO2 pipes was one of the tasks to be undertaken.

Shipboard fire extinguishing systems use high concentrations of pressurised carbon dioxide to lower the level of oxygen in a room and so deprive a fire of the fuel it needs to continue burning. However, exposure to high concentrations of the invisible, odourless gas can cause breathing problems, disorientation, convulsions and even death from lack of oxygen.

The leak during an inspection of fire-safety equipment killed one staff member and injured two others.

Workplace safety has been a persistent problem in mainland China, compounded by inadequate enforcement of safety regulations, inspections and training.

In China, accidents are classified as “serious” if they result in a death toll of 10 to 30, leave 50 to 100 people severely injured, or lead to direct economic losses of between 50 million yuan (about US$7.46 million) and 100 million yuan. The responsible party can be punished with a fine of between 1 million yuan and 3 million yuan.

ILWU Canada members to be locked out by employers