The tall ship began to die early Monday morning in the hurricane-ravaged waters off the North Carolina coast. One of the HMS Bounty’s generators failed. Water flooded everywhere. 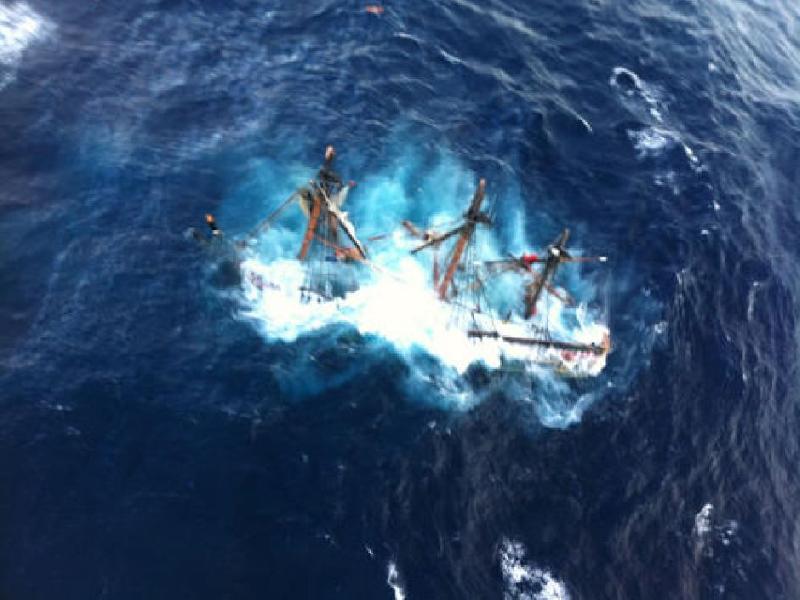 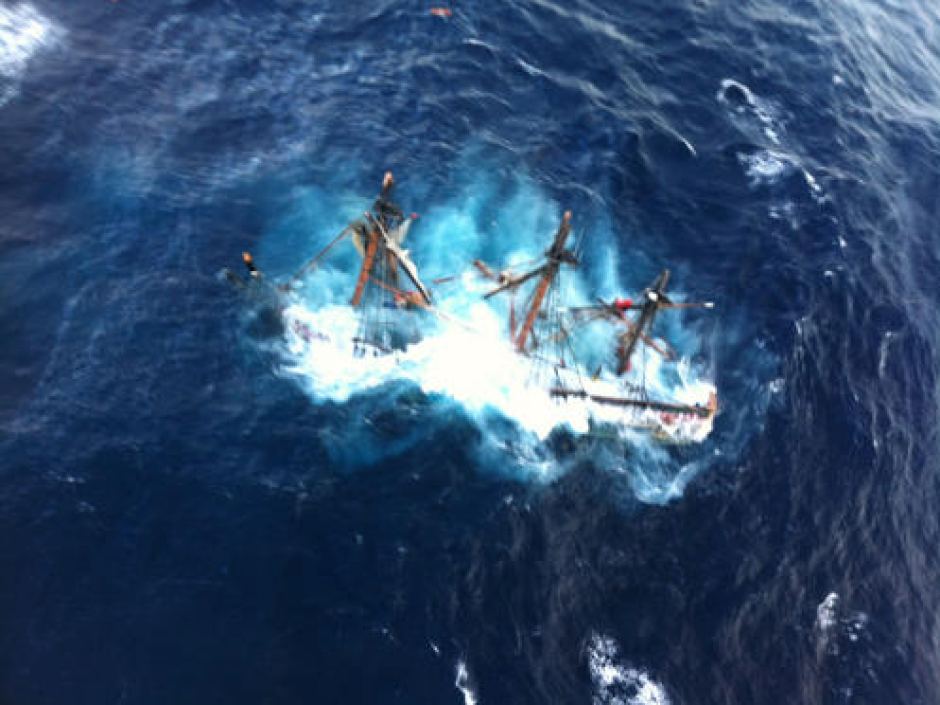 The tall ship began to die early Monday morning in the hurricane-ravaged waters off the North Carolina coast. One of the HMS Bounty’s generators failed. Water flooded everywhere. The 180-foot-long, three-masted tall ship was losing power and propulsion.

By about 3 a.m., the Bounty’s once-optimistic Facebook page, which on Sunday had posted “So far so good!” in its daily updates, had issued a new message for its followers: “Your Prayers are needed.”

Its captain ordered all hands to abandon the sinking ship, a shocking demise for a celebrity vessel built for the 1962 film “Mutiny on the Bounty.”

The ship, which had been trying to make its way around Hurricane Sandy, carried a crew of 16.

When the rescue operation ended about 10 a.m. Monday, 14 of the crew members had been saved by Coast Guard helicopters. Two people, Capt. Robin Walbridge, 63, and Claudene Christian, 42, were missing.

The HMS Bounty, owned by New York businessman Robert Hansen, began its journey Thursday, departing from New London, Conn., for St. Petersburg, Fla., where the ship has docked for years. 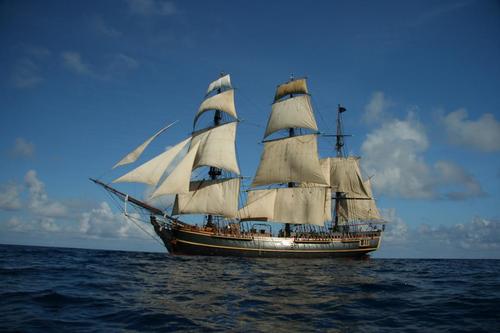 In addition to its star turns in the 2006 “Pirates of the Caribbean” sequel and other Hollywood movies, the ship was used to teach the “nearly lost arts of square rigged sailing and seamanship,” its Web site said. It also offered sailing, teamwork and leadership classes for the general public.

On Saturday, Walbridge reported that he expected to face the hurricane’s brunt that night, according to the ship’s Facebook page.

The HMS Bounty Organization, which ran the ship, knew its tall-ship devotees might be skeptical of the vessel’s path, so it tried to reassure its 8,000 Facebook followers. “Rest assured that the Bounty is safe and in very capable hands,” the Facebook page’s administrator wrote. “Bounty’s current voyage is a calculated decision . . . NOT AT ALL . . . irresponsible or with a lack of foresight as some have suggested. The fact of the matter is . . . A SHIP IS SAFER AT SEA THAN IN PORT!”

But Sunday night, the hurricane was proving too much for the Bounty.

When the captain ordered everyone off the ship about 4:30 a.m., three people struggled to climb into the two lifeboats and were smacked by a wave, the Coast Guard said. One man fell into the water, but others pulled him into one of the boats. Walbridge and Christian were thrown into the water and disappeared. While the HMS Bounty and its crew foundered in the dark, Steve Bonn was woken from a sound sleep in Camden, N.C., about 4:15 a.m. by his ringing cellphone. The 44-year-old Coast Guard helicopter pilot was needed for a mission: A big boat was sinking.

One rescue helicopter had already been dispatched. Bonn, who has rescued ship passengers near the cold waters of Alaska, boarded a Jayhawk chopper with three others: a co-pilot, a flight mechanic and 27-year-old rescue swimmer Daniel Todd.

The first rescue helicopter arrived about 6:30 a.m. Monday, found two lifeboats and focused on one of them. Bonn’s chopper showed up 45 minutes later, and he zeroed in on the second lifeboat, about a mile away from the other. Six people huddled inside.

Bonn piloted his Jayhawk about 50 feet from the life raft, he said, far enough so the propeller draft wouldn’t overturn the lifeboat. But close enough so Todd could quickly muscle his way to the lifeboat. Bonn and his team also had to move fast. They had about an hour to conduct the rescue so they could make it back to their air base without running out of fuel.

Bonn kept his chopper in place, while the flight mechanic lowered Todd into churning waters. Wearing a dry suit, the rescue swimmer shimmied into the black lifeboat.

“Hey, how are you all doing? I hear you need a ride,” he said he told the passengers. “There’s a couple things I need to know. Are you all accounted for? Who has injuries?”

One guy said he had a back injury, so Todd picked him as the first to go.

The scariest moment during the rescue occurred when a 30-foot wave crashed on top of one of the lifeboats with people still inside.

Todd had just deposited someone into the helicopter’s rescue basket and turned around when he saw the boat flipped upside-down by the big wave. The four remaining passengers in the boat had crawled out and were hanging on the sides. He plucked them off and ferried them to the helicopter basket.

“There were times I thought I was going to do body surfing and slide down the face of a 25-foot wave,” Todd said. “There were other times I had my head down, where I felt my feet get lifted over the top my head.”

All six of the passengers in the second lifeboat were airlifted, but Todd and Bonn’s work was not done. The first lifeboat had three remaining passengers because the first helicopter was running out of fuel. So, Bonn piloted the Jayhawk and picked up those three passengers.

On board, everyone cheered and hugged. Todd passed around water bottles. But everyone mostly stayed quiet. Then, exhausted by their ordeal, they fell asleep. With the head winds, it was a two-hour ride back home. Bonn had barely enough fuel when he landed about 10:15 a.m. at the Coast Guard base, he said.

He shut his engine off, satisfied, he said, “that everything worked out.”

Claudene Christian, 42, a crew member of the HMS "Bounty" who went missing off the coast of North Carolina has been found. She was found unconscious and alone. The rescuers began CPR when they found her. It’s believed Christian was in the water for 9 or 10 hours. Christian and the tall ship’s captain were the only two of the 16-member crew who didn’t make it into the life rafts. No word yet if the captain of the ship has been found.

A woman who was rescued in the Atlantic Ocean by the Coast Guard after abandoning ship in rough weather churned up by Hurricane Sandy has died. Coast Guard Petty Officer 3rd Class David Weydert said 42-year-old Claudene Christian was unresponsive when she was pulled from the water Monday evening and was later pronounced dead at Albemarle Hospital in Elizabeth City, N.C., early Tuesday morning, according to The Associated Press. Fourteen people were rescued from the tall ship HMS Bounty early Monday morning off the coast of North Carolina. Crews are still looking for Robin Walbridge, 63. The Coast Guard identified Walbridge as the ship's captain