As the Suez Canal has started to take business away from the Panama Canal this year due to the economies of scale it permits, some will argue that the delayed Panama Canal’s new locks are already long overdue. 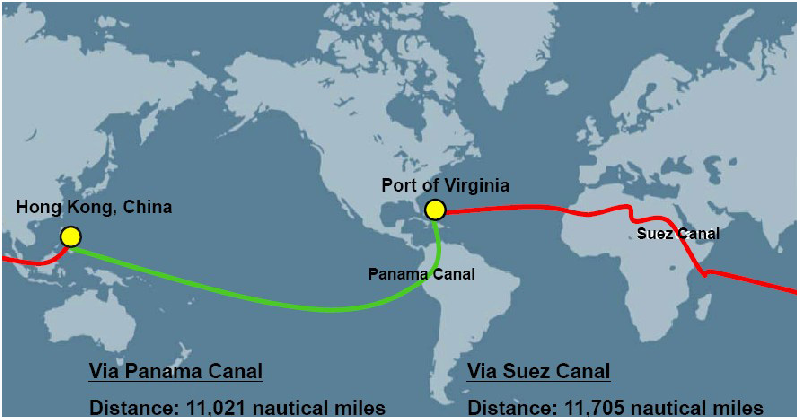 As the Suez Canal has started to take business away from the Panama Canal this year due to the economies of scale it permits, some will argue that the delayed Panama Canal’s new locks are already long overdue.

The further postponement to the opening of the Panama Canal’s enlarged locks from mid-2015 to end 2015 will be welcomed by the Suez Canal Authority. It has already persuaded several ocean carriers operating on the arterial route between Asia and the East Coast of North America (ECNA) to change allegiance this year, and now has more time to persuade others to follow suite.

As shown in Figure 1, the proportion of vessel capacity operating from Asia to ECNA via the Suez Canal increased from around a third between October 2010 and October 2012 up to 42% in October 2013, with the Panama Canal’s share conversely falling from two third’s to 58%.

This was achieved by ocean carriers increasing the average size of vessel passing through Suez from 6,911 teu to 7,756 teu over the past 12 months (see Figure 2), as well as the transfer of Maersk’s TP7 schedule from Panama to Suez, whilst vessels deployed in the services using the Panama Canal have remained restricted to less than 5,000 teu capacity.

Table 1 shows the Asia/ECNA services passing through the Panama Canal and Suez Canal at the beginning of October 2013 in more detail, from which it can be concluded that it is just a question of time before all services passing through Suez deploy vessels over 8,000 teu. The P3’s target for its three services in 2Q 14 is already 8,500 teu, although this will increase its current capacity by just 7%.

Notes: * After deduction of wayport and transhipment cargo, but before deduction of space lost through HCs and oog cargo
Source: Drewry Maritime Research

The Panama Canal Authority will be further worried about the continuing reluctance of North American importers to switch traffic away from the West Coast to the East Coast because, as already demonstrated, the only significant change to date has been the transfer of existing East Coast business from the Panama Canal to the Suez Canal. The proportion of overall vessel capacity headed towards ECNA has steadfastly remained at just over 25% (see Figure 3) of the total operating from Asia to North America, just like cargo flows, which reached 25.3% in 2011, followed by 25.2% in 2012, and 26.3% in the first eight months of this year.

The reasons for this are well beyond the scope of this analysis, but relate to the fact that eastbound transit times are much faster via the West Coast. For example, China to Los Angeles/Long Beach can be done between 10 days and 15 days, whereas US East Coast ports are often only reached after 30 days, on top of which there is a freight rate differential of just under $1,500/40ft (seehttp://ciw.drewry.co.uk/trade_route_analysis/pricing-asia-ecna-6/).

A further worry to the Panama Canal Authority will be that the lack of cargo growth to ECNA comes at a time when vessels passing through Suez have been loading at more Asian ports. Whereas up to now, Suez vessels have mainly been restricted to SE Asian ports due to the shorter distance compared to the Panama Canal, they now regularly load in NE Asia ports as well.

In conclusion, the opening of the Panama Canal’s new locks is already overdue, but that does not mean the damage is irreparable.  Everything currently being lost through Suez could easily be switched back to the Panama Canal depending on the level of its new tariffs. In this respect, the Panama Canal Authority at least knows what it is up against, as the Suez Canal’s charges are already well known, being in the region of $1 million (northbound and southbound combined) for vessels between 8,000 teu and 9,000 teu.

Ocean carriers will not be too troubled by the further delay to the Panama Canal’s new locks as they have already gained some, if not all, of the economies of scale that the new locks will offer.