Somali security forces freed a Panamanian ship from pirates on Tuesday, officials said, two days after they killed one of the hijackers in a gun battle. 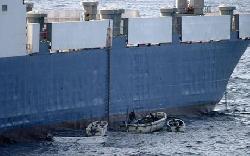 BOSASSO, Somalia (Reuters) - Somali security forces freed a Panamanian ship from pirates on Tuesday, officials said, two days after they killed one of the hijackers in a gun battle.

The Wail was seized by heavily armed Somali gunmen on Thursday as it carried cement to Bosasso from Oman. There are thought to be nine Syrian and two Somali crew members onboard.

"We have succeeded in saving the Panama-flagged ship and its crew," Ali Abdi Aware, state minister for the semi-autonomous northern Puntland region, told Reuters. "The pirates have surrendered and the ship is in our hands now."

"The ship is now sailing towards Bosasso," he told Reuters.

Another senior Puntland government official said the Wail had been slightly damaged during an earlier shoot-out on Sunday in which one pirate and one Somali soldier were killed.

Puntland security forces also seized two of the speedboats used by the gang during that operation, and had been surrounding the Panamanian-flagged vessel since then.

Somali pirates have hijacked more than 30 ships so far this year and received ransoms totalling $18-30 million, making the waters off the Horn of Africa nation the world's most dangerous.

In the highest profile case for years, ransom talks are continuing after they seized a Ukrainian vessel, the MV Faina, which was loaded with 33 T-72 tanks and other weaponry.

Somalia has been mired in civil conflict since 1991.