SHIPPERS exporting through Hong Kong port must pay US$333 per TEU more than they would using neighbouring Port of Shenzhen, according to the BMT Asia-Pacific report commissioned by the Hong Kong Transport and Housing Bureau. 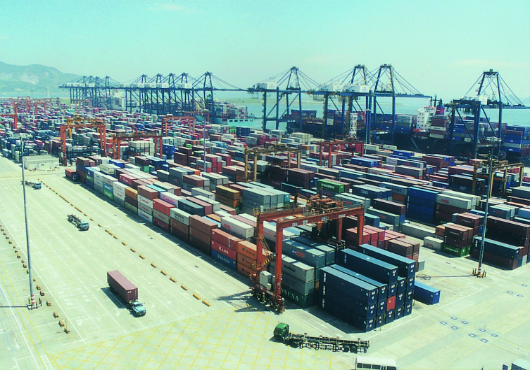 SHIPPERS exporting through Hong Kong port must pay US$333 per TEU more than they would using neighbouring Port of Shenzhen, according to the BMT Asia-Pacific report commissioned by the Hong Kong Transport and Housing Bureau.

"Carriers could move international transshipment business to other hubs. Yet, with the cabotage rule in place, Hong Kong is likely to remain attractive for handling China-related transshipments that will sustain competitiveness of its hub port status," said the report.

The cabotage rule prohibits foreign carriers from domestic maritime transport and shipping cargo between Hong Kong and mainland ports because such voyages are not regarded as domestic transport.

But carriers surveyed in the study said they would transfer international transshipments from Hong Kong to mainland ports if there were no cabotage restrictions.

Transshipments now make up 75 per cent of Hong Kong's total in face of mainland exports rapidly declining via Hong Kong.

"Calling purely for transshipments only adds to a carrier's operating costs. If other business is available at the port, such as gateway cargo, the revenue from carrying this cargo can defray the cost of calling for transshipment purposes," the study said.

"The shipping lines have no reason to lower the THCs. They have no preference for Hong Kong or Shenzhen, either, and can change ports if they are ever unhappy," he said.

Then there is the chronic lack of available back-up land to handle increasing volumes and yard storage needs stand as the No 1 complaint from terminal operators.

"We urge the government to broaden and accelerate their work on the report's key recommendations, including rationalising the use of land and providing additional barge berths adjacent to the existing terminals, given the increasing congestion faced by the port," said Jessie Chung, chairwoman of the Hong Kong Container Terminal Operators' Association.

To which the Transport and Housing Bureau said: "The administration is reviewing the allocation and management of port back-up land in the vicinity of the Kwai Tsing container port currently leased under short-term tenancies.

"The review will explore how to better utilise the land to support the efficient operation of the container terminals and the port as a whole. Proposals will be set out in a document for industry consultation in due course," said the government statement.