Police in Hongkong meanwhile arrested seven crew members after the collision of the "Sea Smooth" and the "Lamma IV", killing 38 passengers of the latter. 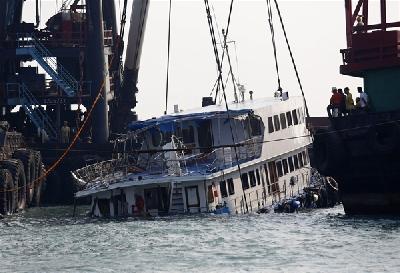 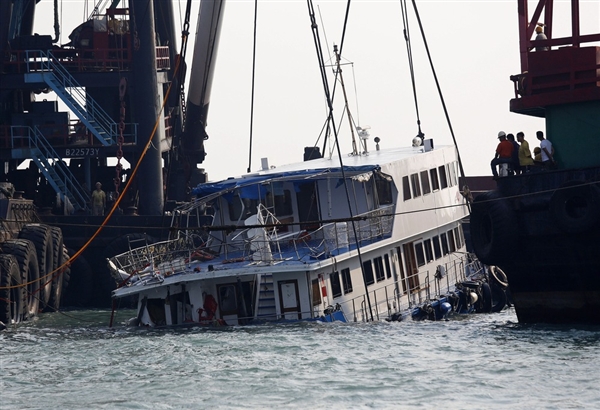 Police in Hongkong meanwhile arrested seven crew members after the collision of the "Sea Smooth" and the "Lamma IV", killing 38 passengers of the latter.

First six people were detained on suspicion of endangering passengers by operating their craft in an unsafe way.

Police later announced a seventh arrest. Both crews were suspected of having not exercised the care required of them by law. 101 people were sent to hospitals, 66 were discharged, and four had serious injuries or were in critical condition.

The "Sea Smooth" was damaged but completed its journey, and some of its passengers were treated for injuries.

The bow was chewed up and chunks were missing. 28 bodies were recovered overnight, and eight more people were declared dead at hospitals. Two bodies found aboard the vessel on Oct 2 raised the death toll to 38.

Though there was no immediate word about how the collision occurred on Hong Kong's tightly regulated waterways, it appeared human error was involved. Both vessels should have been illuminated by running lights when they crashed near Lamma island off the southwestern coast of Hong Kong island.

The director of operations of Power Assets Holdings, the company that owns Hong Kong Electric, said the "Lamma IV" was carrying 121 passengers and three crew members, well below its capacity of more than 200. The company would provide emergency payments of 200,000 Hong Kong dollars ($25,800) to the family of each person killed.