Typhoon Lan which battered Japan, tore off moorings Russian general cargo ship REAL in Fushiki port, Toyama, Honshu, Japan sea, early in the morning Oct 23. The ship was berthed at Fushiki with 19 crew on board, to depart to Russia on Oct 27. REAL drifted in harbor and grounded on breakwater. 1 crew was rescued by emergency rescuers, 18 left the ship by own means, all 19 are safe. 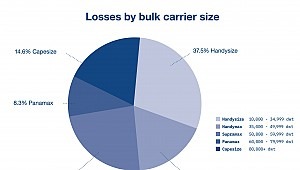