Home PORTS Rotterdam port profit down 1.7pc as it clears debt for Maasvlakte 2

Rotterdam port profit down 1.7pc as it clears debt for Maasvlakte 2 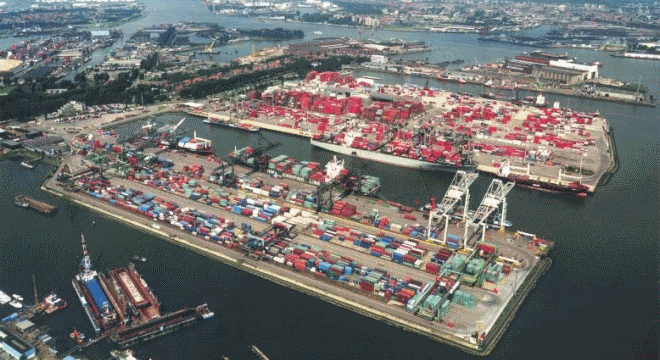 Rotterdam port profit down 1.7pc as it clears debt for Maasvlakte 2
THE Port of Rotterdam Authority posted a 4.9 per cent year-on-year increase in cargo volume in 2015, resulting in a 2.6 per cent increase in port dues to EUR676.9 million (US$735.9 million).
But the port authority also announced that profit fell 1.7 per cent to EUR211.6 million due to the payment on a long-term loan due for the construction of the Maasvlakte 2 terminal area.
"For the second consecutive year after the construction of Maasvlakte 2, the cash flow is positive, which allows us to continue to invest in the port," said chief financial officer Paul Smits.
"The fact that our revenues have not increased to the same extent as the throughput shows that we are making an effort to keep Rotterdam attractive for business," he said.
Sources of income for the port authority include the lease of sites and the seaport dues that ships pay when they call.
Lease site revenues rose by one per cent to EUR340.8 million. Port dues increased 3.4 per cent to EUR316.5 million, which is less than the rise in throughput, up 4.9 per cent.
The port authority granted eco-friendly ships discounts on port dues totalling EUR3.8 million. Thus, operating revenues only rose 2.6 per cent to EUR676.9 million.
Operating expenses rose increased 3.3 per cent to EUR133.6 million, mostly due to higher costs for the management and maintenance of port infrastructure and investments in innovations such as PortXL and SmartPort.
The port authority will propose to its shareholders - the municipality of Rotterdam with a 70.83 per cent stake, and the state with 29.17 per cent - to pay dividends of EUR91 million for 2015: EUR64.5 million to the municipality and EUR26.5 million to the state.
Investments in 2015 included new buoys and dolphins in the Caland and Hartel Canals, the construction of the LNG Breakbulk terminal, quay walls for UWT and Sif - Verbrugge, a jetty for LBC and the redevelopment of RDM Rotterdam.
Last year, the Port Authority invested a total of EUR151.1 million compared to EUR189.4 million in the previous year.