Pirates on Wednesday hijacked a Malta-flagged cargo ship carrying a crew of 15 Georgians and three Turks in the Gulf of Aden off Somalia, the European Union's anti-piracy mission said. 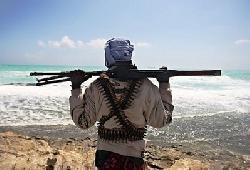 BRUSSELS (AFP) – Pirates on Wednesday hijacked a Malta-flagged cargo ship carrying a crew of 15 Georgians and three Turks in the Gulf of Aden off Somalia, the European Union's anti-piracy mission said.

A US warship deployed a helicopter to check on the ship after several unsuccessful attempts to make contact with the Olib G, a 6,375-tonne vessel, the EU mission said in a statement.

"The helicopter was able to identify two pirates on board," the EU Naval Force Somalia (EU NAVFOR) said. 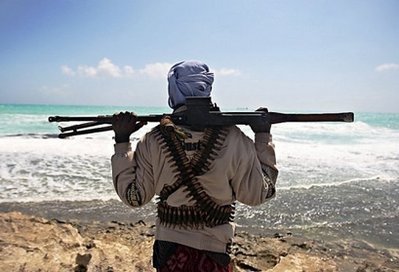 A pirate keeps watch along the coastline at Hobyo town, northeastern Somalia, in January 2010. Pirates …

The ship had been sailing west in the internationally recommended transit corridor, an area where international navies coordinate the patrol of maritime transits, the statement said.

Lieutenant Colonel Per Klingvall, an EU NAVFOR spokesman, said the vessel was heading south towards Somalia's northern coast. The EU mission is tracking the ship by radar, he said.

It was impossible to ascertain the condition of the crew or whether more pirates were on board, Klingvall said.

"We can't tell because we can't establish contact with the ship," he told AFP. "There might be more pirates. We can't see inside the bridge."

Foreign naval powers have deployed dozens of warships since 2008 in a bid to secure the Gulf, a crucial maritime route leading to the Suez Canal through which tens of thousands of merchant vessels transit each year.

But pirates have gradually extended their area of operations, seizing ships as far east as the Maldives' territorial waters and as far south as the Canal of Mozambique.

Naval missions have boasted success in curbing pirate attacks but the number of hijacked ships and detained sailors remains at one of its highest levels since Somali piracy surged in 2007.

Unofficial figures show 2009 was the most prolific year yet for Somali pirates, with more than 200 attacks -- including 68 successful hijackings -- and ransoms believed to exceed 50 million dollars.

At least 23 foreign vessels with more than 411 crew members are still held by pirates, an organisation monitoring piracy, Ecoterra International, said in its latest report on August 31.